What Happens in Vegas Gets Flipped by Plate Tectonics

Just a few miles from the perfectly enclosed, artificial worlds of the Strip's casinos, there lie some beautiful and accessible spectacles of nature. 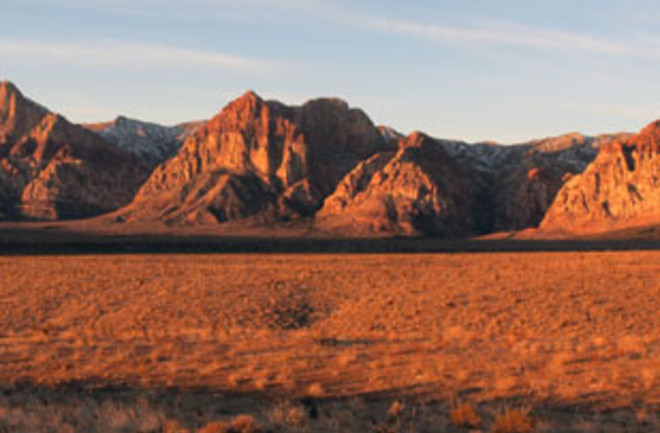 Las Vegas, Nevada—As I flew at night into the Las Vegas McCarran International Airport, the Strip casinos rose like man-made mountains from a desert of low, dark buildings. The lights called to me, and once I reached them, I ducked into a blackjack area and watched desperate people try to beat the house—which, of course, they never would (see “Big Game Theory,” page 58). I sidled up to a table, but before even one card got tossed my way I realized that the blaring music—na na na na, hey hey-ey, good-bye—was telling me what the casino wanted me to say to my money. That moment also reminded me of my real reason for coming to Vegas. I was here not for the man-made mountains but for the much more spectacular real ones just outside of town.

I escaped the casino, rested up in an inexpensive hotel, and the next morning set off to the Red Rock Canyon National Conservation Area, which includes a 13-mile scenic drive about a half hour west of the Strip. The landscapes around Las Vegas present an exceptionally stark account of plate tectonics in action, as nearly 2 billion years of pushing and shoving have scrambled the layers of the earth’s crust—aptly enough, not unlike a deck of shuffled cards. Dune-shaped mountains display 520-million-year-old gray limestone, formed from the remains of marine organisms that once filled a shallow ocean covering the western United States. The limestone sits neatly atop 180-million-year-old red sandstone, representing ancient Jurassic sand dunes. A period of violent tectonic thrusting during the Cretaceous reorganized the rocks into their current arrangement.

I arrived at 8 a.m., early enough to beat the crowds. The first few trails were populated with people dressed for the casinos, but they were easy enough to shake. (A warning to casual day-trippers: Open-toed shoes are no match for these trails.) A mile in, I found welcome solitude and spectacular views.

My destination was the Keystone Thrust Fault, formed during the same Cretaceous uplift that built the shuffled mountains. The fault is among the park’s most significant geologic features in terms of size and surface exposure. Along the way, I encountered a couple returning to the trailhead. “We couldn’t find it,” one of the pair complained. “There’s no there when you get there.” Fortunately, during my planning I had spoken with Michael Wells, a geologist at the University of Nevada, Las Vegas (UNLV), who had advised me what to look for. On the edge of a slight basin would be an abrupt horizontal shift between limestone and sandstone, with the older limestone slightly higher than the younger rock. “You can stand on the thrust,” he had told me. Jubilantly arriving, I planted one foot on red sand and the other on gray and took a photo, thinking of Mama Cass Elliot: “They tell me the fault line runs right through here.”

Hoover Dam is a short drive from the Vegas Strip.iStockphoto | NULL

Red Rock’s 196,000 acres lie adjacent to another product of the Cretaceous—the stunning Spring Mountains—which I explored the following day. Formed when massive slabs of seabed limestone were thrust on top of one another, the Springs are in many ways a distinct eco-island, complete with locally endemic species. The highest point is the summit of Charleston Peak, just shy of 12,000 feet. Rising from scorching desert, Charleston Peak is blanketed with ponderosa pines and bears snow as late as May. I managed to hike high enough to have some trouble breathing, though the waterfall at trail’s end made me glad I had kept going.

My next target, on day three, was a traveling mountain. Between 5 and 19 million years ago, the Pacific Plate’s northwest movement tugged the North American Plate westward, breaking Frenchman Mountain off the Colorado Plateau, home to the Grand Canyon. The plate interactions hauled the mountain 50 miles west and deposited it on the eastern edge of what is now metropolitan Las Vegas. Layer for layer, the rocks of Frenchman match those of the Grand Canyon. And, like the canyon, Frenchman is famous for an enormous gap in the ages of two adjacent rock strata. Stephen Rowland, a paleontologist in the UNLV department of geoscience, told me that the Precambrian granite and schist at the base are about 1.7 billion years old. Sitting immediately above them is Tapeats sandstone, just a half-billion years old. The missing 1.2 billion years—25 percent of the earth’s age—is a gap known as the Great Unconformity. Rowland says that the granite and schist formed deep inside an ancient mountain range. Erosion eventually wore the mountains down, exposing the older rocks. Rising sea levels then buried them in sand, which became the younger stone.

Seeing the geologic remnants of the prehistoric ocean that once covered the region got me curious about the gargantuan water recovery effort that makes a desert megalopolis like Las Vegas possible, so I made my last stop the Clark County Wetlands Park Nature Preserve, just south of Frenchman. There, wastewater from the city is cleaned before being shunted back into Lake Mead, the city’s primary freshwater supply. A water purification plant handles most of the task, but the wetlands’ strategically planted vegetation helps. There is no smell, and the 130 acres of flora provide habitat for an impressive variety of wildlife.

As dusk descended and the air cooled, I heard a coyote in the distance. This may not be what most people think of when they imagine getting wild in Vegas, but for me it felt perfect.

Hoover Dam Constructed in the 1930s on the Colorado River, this man-made wonder created Lake Mead, the largest reservoir in the United States.

Valley of Fire State Park See petrified logs dating from the Triassic and sandstone “beehives” resembling apartment buildings that may have provided shelter to the area’s early inhabitants, who left petroglyphs on canyon walls. For movie buffs, this is where Captain Kirk met his death in Star Trek: Generations.

City Center When you’re ready to return to civilization, check out the engineering marvels of this new, 18-million-square-foot Las Vegas complex, the first in the city to earn the U.S. Green Building Council’s LEED Gold environmental certification for features such as a natural gas electricity plant whose waste heat is used to generate hot water.