Removing wooded areas is called deforestation and it’s often for human benefit. But the impact of deforestation could be devastating to the environment. 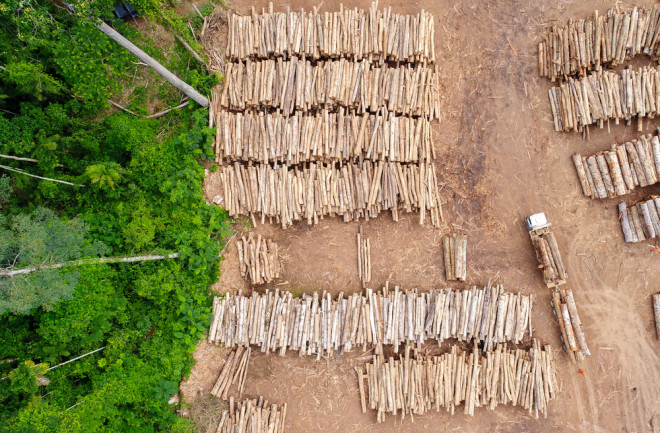 Since 1990, an estimated 178 million hectares of forest have been lost worldwide. And one hectare is around 100,000 square feet, making this estimate the equivalent to an area the size of Libya.

From 2015-2020, an estimated 10 million hectares worldwide were deforested each year. Environmental scientists warn that forest restoration is needed, or the environmental impact will be devastating and lead to long-term climate consequences.

Deforestation is the thinning or removal of wooded areas. Historically, forests have been destroyed for a variety of reasons such as creating farm land, grazing areas for livestock or expanding urban areas. Logging and other industries have also been responsible for demolishing woodlands.

After the Ice Age ended, more than 10,000 years ago, glaciers began to recede in some places and melt in others, and modern forests took root and then flourished. Environmental historians say this was also the start of humans altering or even destroying forests to suit their needs.

Globally, 35 percent of forests have been lost in the past 300 years. Of those that have survived, 82 percent have been compromised by human activity. More than half the world’s forests are now found in just five countries — Brazil, Canada, China, Russia and the U.S.

Problematically, most animal species call forests home. Eighty percent of amphibian species, 75 percent of bird species and 68 percent of mammal species live in forests, according to The State of the World’s Forests 2020: Forests, biodiversity and people.

Tropical rainforests are currently the target of deforestation, and environmental scientists warn that if this vital area is destroyed, the entire planet will suffer.

Environmental scientists argue the loss of the Amazon will have a global impact for several reasons. Photosynthesis, the process in which trees pull carbon dioxide from the air, helps to reduce (but not eliminate) the greenhouse gases that are contributing to climate change. Trees provide long-term carbon storage, and less trees means less carbon removal from the atmosphere.

Deforestation in the Amazon will also have an impact on rainfall. Deforestation lessens the amount of moisture that can cycle from trees into the atmosphere through a process called evapotranspiration. In some areas, the decrease in moisture could actually lead to heavier rains and more precipitation than needed. Other areas could see the opposite happen, and experience a reduction in rainfall by 40 percent.

Thinning, or eliminating wooded areas like the Amazon, means the animals that once lived among trees wouldn’t have a habitat. Some species could adapt and live in what environmentalists call “forest fragments” close to urban areas. But these species could bring their infectious diseases with them and make animal to human transmission possible. It’s another reason why world leaders are trying to prioritize forest-building initiatives.

Humans have hacked down trees for thousands of years, and rebuilding forests won’t happen in a matter of decades. In the last decade, global initiatives encourage countries to commit to replenishing lost woodland.

In 2011, the German government launched the Bonn Challenge and invited other countries to pledge to restore destroyed hectares in their country by 2030. Overall, the goal is to restore 350 million hectares globally. Sixty-one countries, including the U.S., are participating. The U.S. is currently restoring more than 16 million hectares.

As encouraging as these figures seem, reports from other global initiatives aren’t as optimistic. The United Nations Strategic Plan for Forests 2017-2030 wants to increase global forest area by 3 percent. This would be the equivalent of adding on woodlands twice the size of France. The plan is not on track, and while some regions like Europe, Asia and Oceania are keeping pace, South America continues to lose more hectares each year than are rebuilt.

In response, the United Nations (UN) held a roundtable in 2021 to discuss a path forward. Amina Mohammed , UN deputy secretary-general, called the situation urgent, and then put into perspective what deforestation means to the world:

“...each year, 10 million hectares of forest are destroyed — an area larger than the U. K.,” she says.  “If tropical forest loss was a country, it would be the world’s third-biggest emitter of carbon dioxide.”