Welcome to the Anthropocene, the First Human Epoch 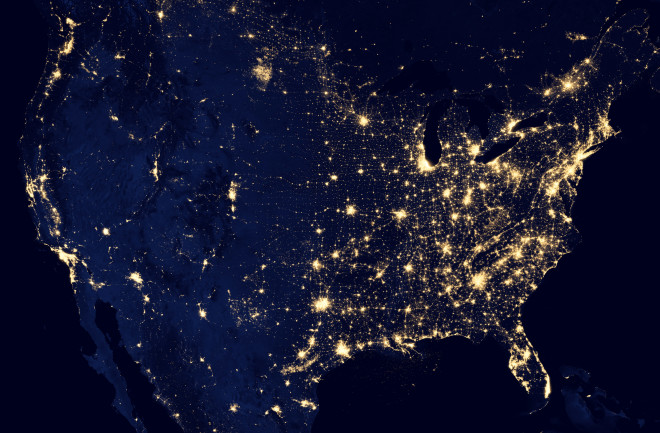 (Credit: NASA/Wikimedia Commons) This week, at the 35th International Geologic Conference in South Africa, members of a working group recommended that the Anthropocene be officially recognized as the latest geologic epoch. This would mark a transition from the Holocene, which began almost 12,000 years ago at the end of the last Ice Age, and the beginning of the "age of humans."

Living in the Human Age

The term "Anthropocene" was popularized in 2000 by atmospheric scientist Paul Crutzen to refer to the unprecedented rate of environmental change occurring in the age of man. Since then, proponents have argued that humanity is altering the Earth to such a degree that our influence will be discernible millions of years from now. The term has seen widespread usage, but has not yet been formally recognized by the International Union of Geological Sciences (IUGS), the body that rules on the geological time scale. The Working Group on the Anthropocene (AWG), a subset of the IUGS, published a paper last year that summarized the majority opinion of the group: conditions that defined the Holocene have changed enough that the Earth has entered a new epoch. For the Anthropocene to gain epoch status, geologists must prove that it has left a mark on Earth's skin. For example, the end-Cretaceous extinction that wiped out the dinosaurs stands out clearly as a thin line of iridium etched into the rock. Today, it's not an asteroid that's precipitating global changes, it's us. While the evidence of climate change is clear on the surface, it's harder to see the effects on a geologic level. For something to appear in the very bedrock of the Earth, it needs to cause changes at a fundamental level. Like rings on a tree, geologists look to the varying strata of Earth's bedrock to piece together the planet's history. Now, for the first time, we are looking at the rock and seeing evidence of ourselves. Various papers have identified telltale markers of human intervention, including fly ash from the Industrial Revolution, pesticides in the soil, changing levels of carbon dioxide in ice cores and increasing rates of species extinction; but the sign that will likely hold up best is radioactive material.

The BAKER test of Operation Crossroads, July 25, 1946. (Credit: Everett Historical) Beginning in the 1950s and ending in 1980, atmospheric tests of thermonuclear devices spread radioactive elements like uranium and plutonium around the world. These elements are distinctly unnatural and will be visible for millions of years in sediments the world over. In addition, they correspond to a relatively narrow band of time, making stratigraphic dating more precise. This measure would put the beginning of the Anthropocene around the middle of the 20th century.

It's important to remember that the beginning of the Anthropocene does not correspond the first measurable indications of human activity. Rather, it is the first point at which human activity shows up in the stratigraphic record. While artifacts of our civilization may date further back, our epoch begins when human activities first appear in the layer of rock beneath us — what's called a golden spike. This method of dating turns the geologic process on its head, says Jan Zalasiewicz, a researcher at the University of Leicester and AWG member. Instead of looking back through the layers of rock and piecing together the story of the Earth, researchers are now looking to the sediment for evidence to confirm a theory. And, they found it. "This is not some speculative thing that might happen, we're talking about what has already happened and where there’s already a record," says Peter Haff, a geophysics professor at Duke University, also a member of the AWG. "Moreover, if humanity were to disappear today, the changes that have already been wrought on the surface of the earth are sufficiently large that even a million, a hundred million years from now, if somebody looked back ... they would see that there was some serious change in how the Earth functions, and it happened right about this point in time," he says. The last epoch, the Holocene, lasted 11,000 years. The two before that lasted 2.5 million years. The epoch before those two went on for almost 20 million years. It used to take a long time for the planet to undergo momentous shifts that are captured in layers of rock. That we've shifted epochs in a fraction of the time implies significant and long-lasting changes have occurred in only a few thousand years of human civilization.