WATCH: Heavy flooding stretching from Indiana to Mississippi, as seen in satellite imagery

A before-and-after animation of satellite images reveals the extent of flooding along rivers in the southern United States in late February of 2018. (Images: NASA Earth Observatory. Animation: Tom Yulsman) As February was drawing to a close, heavy rains and melting snow led to extensive flooding in the central and southern United States that was easily visible to orbiting satellites. 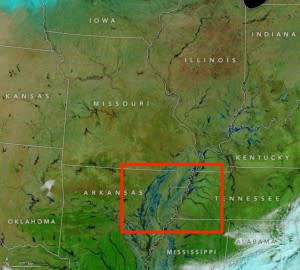 The red box shows the area covered by the large animation of images above. (Image source: NASA Earth Observatory) The before-and-after animation above is a noteworthy example. The river running from top to bottom is the Mississippi, with Arkansa to the left and Tennessee to the right. Small portions of Missouri, Kentucky and Mississippi are visible as well. Click on the thumbnail at right to see the area covered by the image. The before image was acquired on February 17, 2017 by NASA's Aqua satellite. The very heavy rains that came in late-February of this year led to the flooding that's clearly evident in the the second image, captured by the Terra satellite, Aqua's twin, on February 26, 2018. To clearly discern the flooding, the images are false color, employing a combination of visible and shortwave infrared light. https://twitter.com/Fox24News/status/966361993635614725 The heavy rainfall and flooding extended far upstream. As described by NASA's Earth Observatory:

At the head of the Ohio River in Pittsburgh, new storms drenched an area that has already seen plenty of rain this winter, according to news reports. In Cincinnati, the river reached 2.6 meters (8.53 feet) above flood stage—the highest in since 1997.

Here's another remote sensing view, showing the extent of the flooding from Indiana down into Arkansas and Mississippi:

Before and after images acquired by a satellite. (Source: GOES-16 Loop of the Day, RAMMB/CIRA) This animation consists of images from the GOES-16 weather satellite. The pre-flooding image is from January 28 of this year. The second one was captured on February 26th.