We like to think about risks with simple arrows. If A, then B. If wildfires break out, some people may lose their homes. If an oil pipeline leaks, it can pollute the soil. But if you put a wildfire and an oil pipeline leak together in the same place at the same time, the whole becomes a lot nastier than sum of its parts. The world's oceans face three different major risks from the carbon that we put in the air. That extra carbon (9.2 billion tons in 2009 alone) is acidifying the ocean, warming it, and possibly even stripping it of oxygen. I've written about all three of carbon's impacts in recent years, but I've chosen to writeaboutthem independently. That's standard practice in journalism: you select one narrowly defined topic and explore it as deeply as you can in the space you've got. But these three impacts are all hitting the same ocean all at once, and they're interacting with each other as they do. In a new paper in the Philosophical Transactions of the Royal Society, the environmental scientist Nicolas Gruber warns that this "triple whammy" could prove to be more than the sum of its parts--especially in parts of the world where all three may hit particularly hard, such as the waters off the coast of California. Over the past 250 years, the ocean has soaked up about 30 percent of all the carbon dioxide we've released. When carbon dioxide dissolves into sea water, it lowers the ocean's pH. This process is known as ocean acidification, which is a bit of misnomer. After all, the ocean's pH, which has dropped from 8.2 to 8.1 over the past two centuries, is still officially alkaline (acids have a pH below 7). But arguing over a label for this transformation is a pointless distraction from the magnitude of what we've done. The pH scale is logarithmic, meaning that sea water with a pH of 8 contains ten times more positively charged atoms than sea water with a pH of 9. We've raised the total number of hydrogen ions in the ocean by thirty percent. That's a lot of ions. If the rate of carbon emissions continues to rise, we will add even more. Under the most optimistic scenarios, the pH will drop to 7.9 or 7.8. All those extra ions will alter the lives of marine organisms. It will be harder for some animals to form calcium carbonate skeletons, for example. A lower ocean pH will alter photosynthesis as well, along with the growth of some fishes and other animals. While scientists have a clear understanding of the chemistry of ocean acidification, they're only beginning to learn about the possible biological impacts. But the National Research Council warned last year that ocean acidification could have a big impact on people as well, as it slams the fisheries and aquaculture on which we increasingly depend. The oceans can only sop up a fraction of the carbon dioxide we put in the air. As a result, the concentration of carbon dioxide in the atmosphere has steadily risen. And that CO2 has been trapping some of the sun's energy, and thus warming the atmosphere. The oceans have warmed up as a result; the surface of the sea has warmed .7 degrees C over the past century. As the oceans continue to warm, the extra heat will have its own impact on life. It will allow some species to thrive in some places; it will shift the ranges where others can survive. And it will put stress on the species--such as corals--that are pretty much stuck in one place. Global warming may also strip oxygen from the oceans. Warm water holds less dissolved oxygen, and as the ocean heats up, scientists expect that the circulation of water from its top to its bottom will slow down. As oxygen gets used up in the deep ocean, there will be less coming down to replace it. (Fertilizer run-off and other pollution on land is also producing low-oxygen dead zones in the Gulf of Mexico and elsewhere.) Scientists are only starting to come to terms with how we're altering the oxygen in the ocean, so the details are still fuzzy. They have yet to measure the world-wide trend of ocean oxygen, for instance. But they have managed to measure declines in some regions of the sea. There's also an oddly high level of oxygen in the atmosphere, which may be coming from the ocean. In his new paper, Gruber surveyed the projections over the next century for all three factors--temperature, pH, and oxygen--around the world. These projections spread across a wide range, in part because there's still a lot of uncertainty in the science, and in part because the future of carbon depends on what our species chooses to do in the next few decades. But some patterns do look pretty clear, as illustrated in two figures I adapted from Gruber's paper: 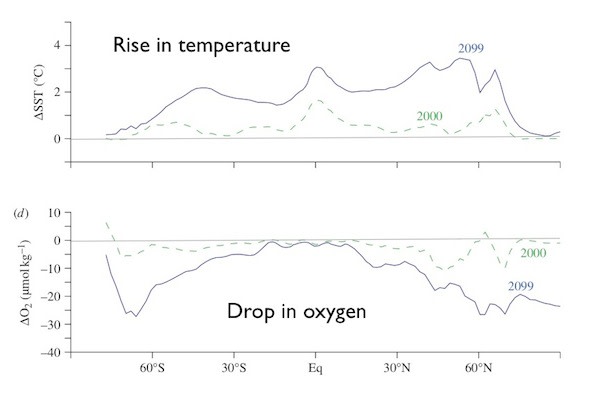 The warming of the oceans will not be uniform, for example. The biggest warming will come in the Arctic, as the sea ice disappears and can no longer bounce much of the incoming radiation away. It's possible that the rise in termpature will cause a boom in photosynthetic plankton, which will support a bigger ecosystem. But the warmer temperature may speed up the chemistry of all life in the Arctic ocean, and much of the carbon drawn down by a booming Arctic ecosystem may quickly end up back in the atmosphere. What's more, the surface of the Arctic ocean may mix even less with the deep ocean. If that happens, then less carbon dioxide will be stored in the deep ocean. Both changes could speed up the accumulation of carbon in the atmosphere. Acidification will also hit some parts of the world harder than others, thanks to the temperature and chemistry of each region. Gruber warns that it will become seriously difficult for animals to form calcium carbonate skeletons in the Arctic Ocean surface waters in a decade. The ocean around Antarctica may cross this threshold in the second half of this century. By the end of the century, this acidified zone will spread into the North Atlantic and North Pacific as well. Corals, shellfish, and other organisms that depend on calcium carbonate for their skeletons could all be affected in these regions. Projecting changes in oxygen is a much rougher science, Gruber warns, but all the models foresee a worldwide drop of somewhere between 1 and 7 percent of the ocean's oxygen in the next century. Again, however, the real story is in the regional differences. In much of the world's oceans, the oxygen levels may barely drop at all. But in some places, oxygen may drop far enough that it will threaten the well-being of animals that depend on high levels of the gas, such as fish and crustaceans. The impact in each part of the world will depend on how high oxygen levels are right now, and how rapidly new oxygen is delivered from other parts of the sea. Each of these changes poses risks to the health of the ocean. But combined, each risk may be able to make the others bigger. Low oxygen speeds up ocean acidification, for example, while ocean acidification can speed up the loss of oxygen. As organic matter breaks down, it reacts more with oxygen that's rich in carbon. Some studies also suggest that in a CO2-rich ocean, it's harder to get energy from food. Animals under this stress will need more oxygen to survive--precisely when oxygen levels may be dropping. Making matters worse, the warmer water will speed up metabolism, increasing the demand for oxygen even more. These synergies will be stronger in some parts of the world than others, because changes in temperature, pH, and oxygen are different in different parts of the world. Gruber put together this map shown below. 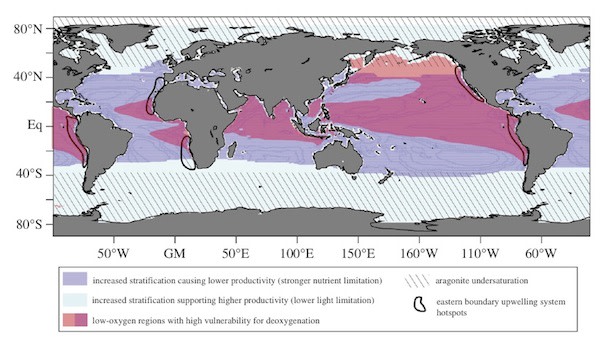 The circles mark hotspots where carbon's triple whammy may hit hardest of all. Along the coast of California, for example, marine life depends on nutrients that well up from the deep ocean, and a warming ocean will slow down that delivery. It's also naturally at a low pH and has relatively few carbonate ions, making it especially vulnerable to acidification. Making matters even worse, the waters off of California are low in oxygen, so a further drop could have a big effect on them. Gruber points out that up till now, scientists have focused on just one kind of impact carbon is having on the oceans. They've barely begun to explore how each impact mingles with the others. I see this mingling as a challenge in my own work as a writer. A tangled web of risks is hard to explain, let alone pitch in a lede. But nature doesn't much care about a simple story. Reference: Nicolas Gruber, "Warming up, turning sour, losing breath: ocean biogeochemistry under global change." Phil. Trans. R. Soc. A (2011) 369, 1980–1996 doi:10.1098/rsta.2011.0003 Photo: Cocoa Dream at Flickr