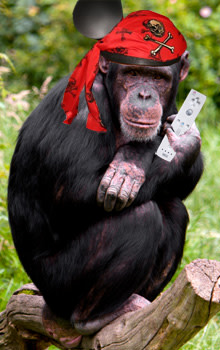 There's a high probability that the last chimpanzee you saw on television was wearing suspenders and a hat or was smoking a cigar. Of course, it could also have been playing pranks in an ad for CareerBuilder.com (video), or dancing in a commercial for Arby's (video) or ETrade (video), or giving a high five to Matt LeBlanc from Friends. We're habituated to seeing chimps anthropomorphized on television, but are there any downsides to all this alleged fun besides hackneyed, mediocre humor? Apparently so. Last week, a group of primatologists, including the distinguished Jane Goodall, wrote a letter to Science magazine (subscription required) that criticized the entertainment and media industry for their portrayal of chimpanzees, stating that "such inappropriate portrayals are viewed by millions of people annually," leading people to mistakenly perceive "chimpanzees as frivolous subhumans that are not in danger of extinction." Their conclusion was based on surveys conducted at the Lincoln Park Zoo in Chicago, IL, and the Great Ape Trust of Iowa in Des Moines. In the surveys, over 90 percent of respondents said they thought gorillas and orangutans were endangered, while around two-thirds of respondents thought chimps were. In reality, all three great apes are endangered—the majority of people got it right—but why the difference? According to the primatologists, the media are to blame. "In movies, television shows, and advertisements," the letter reads, "chimpanzees are often depicted as caricatures of humans, dressed in clothes and/or photographed in contrived poses." The authors then insist that "the inappropriate portrayal of great apes in advertisements undermines the scientific, welfare, and conservation goals that we... work hard to achieve." Even professional publications like Science must bear some of the blame. One of the biggest gripes of Goodall and her fellow authors was against the magazine and its parent organization, the American Academy for the Advancement of Science (AAAS), for a recent promotional campaign in which "chimpanzees were shown dressed in hats while reading an issue of Science magazine... although, it should be noted that the campaign was halted when AAAS was made aware of objections." (The campaign, we should note, wasn't actually "halted"—they just took the hats off.) But are the media wholly to blame for the relatively small degree of the public's misconceptions? Maybe not. According to the International Union for Conservation of Nature (IUCN), chimpanzees are classified as endangered—that is, "facing a very high risk of extinction in the wild." Not good. Gorillas and orangutans, however, are classified as critically endangered—"facing an extremely high risk of extinction in the wild" [emphasis added]. It's highly possible that gorillas and orangutans have received more publicity about their endangered status simply because their situation is more dire. Of course, "a very high risk" is certainly nothing to scoff at, so it's important for conservation efforts that people become aware of the threat facing chimpanzees, which is largely from deforestation and commercial hunting for bushmeat.

Image modified from: GinaMig/Flickr and iStockPhoto