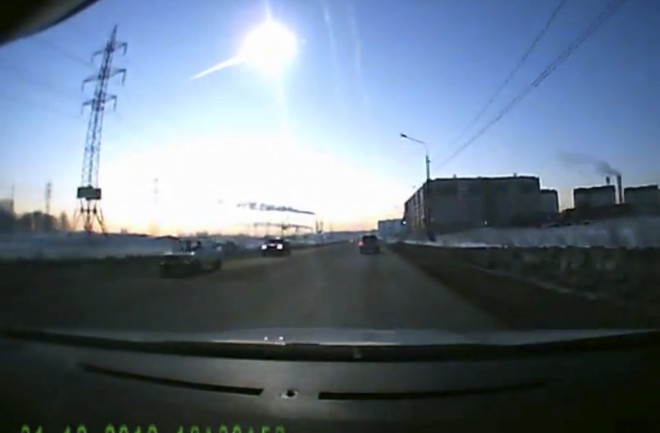 Screen capture of a video showing a meteor streaking above the Russian city of Chelyabinsk. Click for the video. [Update: I've included below new information from the Russian Academy of Sciences, including an updated estimate of the size of the meteor.] I woke up this morning to news of a meteor leaving a trail of fire and smoke over the Russian city Chelyabinsk, near the Urals. Click on the screen capture above for dramatic video of the event. RT.com is reporting that about 950 people have sought medical attention in the city. The meteor was first estimated to have weighed 50 tons before entering the atmosphere. Russian scientists now are putting it at 10 tons. Here is the latest information about the meteor from the Russian Academy of Sciences (translated into English by Google's auto-translation feature, with a little editing for clarity):

We estimate the size of the body was a few meters, the weight on the order of ten tons, the energy at a few kilotons. The body fell into the atmosphere at a speed of 15-20 km/s, collapsed at an altitude of 30-50 km. The movement of the fragments at high speed caused a powerful glow and a strong shock wave. The main part of the falling body has evaporated (burned). The fragments that remain stalled and could fall to the ground as meteorites. Usually, the total mass of meteorites is found to be no more 1-5% of the initial mass. The main energy was released at an altitude of 5-15 km. Bodies of this size fall quite often, several times a year, but usually burn at high altitudes (30-50 km). [This] body seems to be very strong, probably iron. The last time a similar phenomenon was observed in Russia was in 2002 (Vitim bolide). More accurate estimates can be given after receipt of all the information available.

Below is another screen capture. Click for a video capturing a massive explosion (apparently the sonic boom of the meteor) and its after effects — shattering glass and sirens going off.

I'll try to post more information about the event, as well as some background on the science of meteors, later in the day and over the weekend.