Traffic signs are as unnecessary as they are annoying. 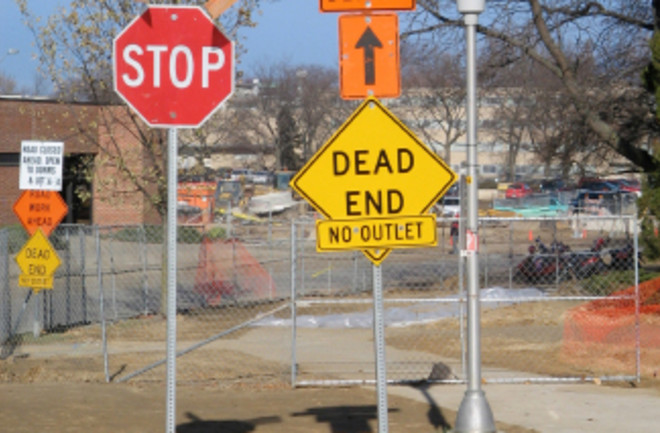 After years of watching engineers model traffic flow with advanced physics to alleviate jams, a team of urban planners called Shared Space have adopted a simple solution based on a zoological concept known as the risk compensation effect. Basically, it means that animals tend to adjust their behavior to compensate for perceived risk. Applied to traffic, the idea is that people will drive more cautiously if they believe they are in a dangerous environment. The effect may explain why taxi drivers with antilock brakes drive faster or why wearers of bicycle helmets get struck down more.

The Shared Space team believes that signs, signals, and the traffic rules they represent make the roads more dangerous because they lead us to believe we are safe. “Conventional highway engineering operates on the dumb molecule theory of human behavior,” says John Adams, emeritus professor of geography at University College London and a Shared Space advocate. “And the human molecule is responsive to what it sees about it.”

Today five American cities are trying the approach, and seven major pilot projects are in the works across Europe. The town of Drachten in the Netherlands has only 2 of its 18 traffic lights left. Since the program began in 2004, accident rates at the town’s main intersection have dropped to only one per year from a previous nine-year average of just over eight, congestion has fallen by 20 percent, and journey times have been reduced by 10 minutes. Stripping London’s busy High Street Kensington shopping area of some of its signage, lights, and pedestrian barriers reduced traffic-related casualties by 43 percent. After the English town of Seend went bare, it witnessed a 5 percent fall in average speed, and accidents dropped by a third. Shared Space’s success is about more than safety, Adams says. “I think that there is a dawning collective guilt about how we’ve allowed the car to wreck not just the physical environment but also the social environment.”