Up For Adoption: 145 Yellowstone Bison 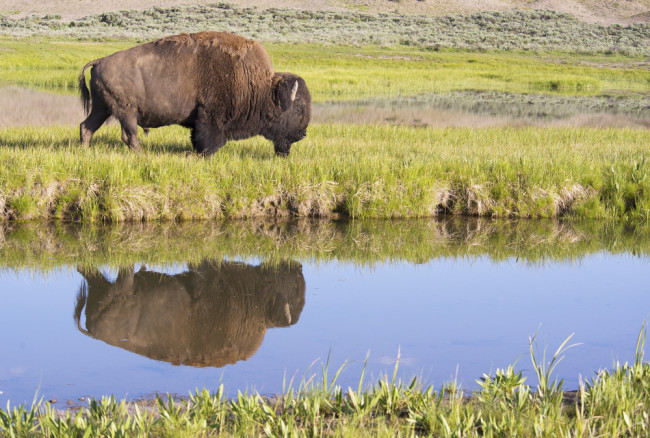 Shaggy, hunchbacked bison are the quintessential symbol of the Great Plains, and now Yellowstone National Park is looking to give away 145 of these uniquely American buffaloes under a plan released last week. This small group of bison is a success story in wildlife managers’ efforts to control the spread of brucellosis, a bacterial disease carried by roughly 50 percent of Yellowstone's bison. The 145 animals are the fruits of an experiment started a decade ago to quarantine a handful of the thundering beasts in order to build small, disease-free herds. The bison will be given away to conservation organizations in five states, Reuters reports

, to help bolster populations elsewhere in the U.S.

The bison population once numbered in the millions, but aggressive hunting practices cut their numbers to just 50 by the early 20th century, according to Reuters. With few mates around, bison interbred with cattle, muddying the bloodline. Today, about 5,000 of the animals roam Yellowstone, and it’s the largest genetically pure population of bison on the planet. However, much of this population carries brucellosis, a disease that causes cows to miscarry and which can easily be passed on to commercial livestock. Though the disease has been eradicated in 48 states, it is still present in Wyoming and Montana.

In addition to bolstering outside bison populations, the plan has a secondary purpose: to help get rid of Yellowstone's bison. The National Parks Service oversees regular culling of Yellowstone bison to help protect commercial livestock in Montana from brucellosis. Even so, their numbers keep growing. This winter, managers plan to thin Yellowstone’s herd by killing 900 animals

, the largest cull in seven years. This isn't the first such giveaway either. Over the past few years, bison from the disease-free herd have been given away to conservation groups around the country to augment other populations. This next group of 145 will be given to the Bronx and Queens zoos in New York, the Cherokee Nation in Oklahoma, and the Utah Division of Wildlife Resources.

Planet EarthWild Chickens Rule the Streets in Some Beach Towns. Here's Why One Scientist Is Studying Them