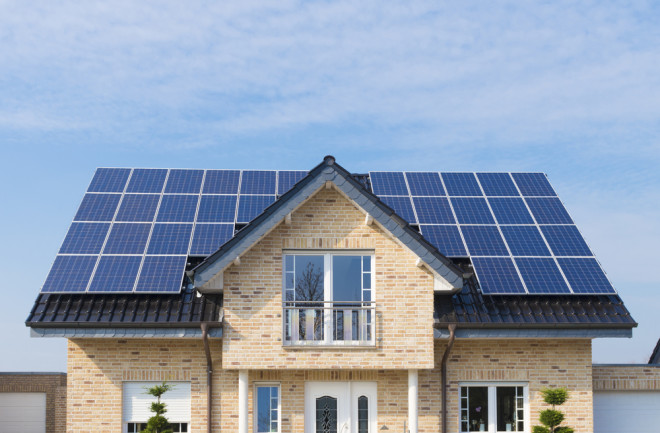 Unsuspecting passersby would never guess that a technological revolution is unfolding at the Los Olivos Pilot Zero Energy House in Livermore, California. At first glance not much distinguishes this Craftsman-style house from the other high-end residences sprouting like weeds on the dry, brown hills east of San Francisco. The 3,079-square-foot bungalow has three bedrooms, 21/2 baths, a library, and a two-car garage. Sunlight streams through the abundant windows and the French door that leads from the family room out to the garden in back. Ten-foot ceilings create an airy ambience; bamboo floors, stone-faced fireplaces, and a Sub-Zero refrigerator provide the luxury touches that homeowners have come to expect from an $800,000 purchase.

A closer examination, however, reveals discreet features that make the house extraordinary, including a set of iridescent black-glass photovoltaic panels on the roof, a strangely squat water heater in the garage, and a small weather sensor sprouting from the side of the house near two sets of louvers. The most telling detail is the power-monitoring panel, a digital utility meter mounted in the hallway. At night or on overcast days, the meter indicates that the house draws current from electric lines in the usual manner. When it is sunny outside, the process reverses, and electricity from rooftop photovoltaic cells, which can generate up to 2.6 kilowatts of power at high noon, flows outward. Over time the numbers should average out so that there is no net electricity drawn from the power grid. That means that the annual electric utility bill will come to a nice round $0.00.

The Los Olivos zero-energy house, completed last July by Centex Homes of Dallas, is a new type of living space that doubles as a power source. In the past, people seeking non-polluting independence from the grid—or simply living too far away to connect to it—have generally relied on costly and potentially hazardous electrical systems that use clusters of batteries to store energy generated by windmills or photovoltaic arrays. Unlike most of these earlier attempts, the Los Olivos house and a handful of other prototype "net zero" dwellings remain connected to the grid and sell whatever surplus electricity they generate to local utilities. As a result, they look almost exactly like conventional houses, storage batteries are unnecessary, and current is available at all times.

Centex has also designed its house to make efficient use of energy. Heating and cooling account for about half of an average home's energy consumption, and water heating contributes roughly another 13 percent. So Centex set the house on an insulated concrete foundation rimmed with polystyrene and built it with cellulose-filled walls. The big, bright windows are double-pane glass covered with an invisible coating that reflects thermal radiation. A large tank in the garage is part of a solar hot-water system, combined with an on-demand water heater that also warms the house on cold days. Motion sensors activate a pump when someone enters the bathrooms or the kitchen so that hot water is available. "When you take a shower in the morning, the hot-water pump will automatically go on, but it's not circulating constantly," says Trece Herder, project manager for Centex's zero-energy house.

During the summer, the Los Olivos house remains comfortable because of Night Breeze, an experimental heating, cooling, and ventilation system developed by the Davis Energy Group of Davis, California. By drawing in outside air at night, Night Breeze cools the house and limits the need for daytime air-conditioning. The weather sensor on the side of the house reads the outside temperature, predicts the next day's weather, and sends that information to a computer-controlled, variable-speed fan that provides exactly the right amount of cooling airflow. Because of its thorough insulation, bare floors, and a foundation that takes a long time to change temperature, the house remains cool during the day. In addition, a foil-like sheathing under the roof keeps the sun's heat from roasting the attic. "It's not just the photovoltaics or the solar hot-water heater or Night Breeze that gets us to zero net energy. It's the combination of products, working together in an integrated fashion," Herder says. Seemingly minor details such as landscaping, the orientation of the house, shade-producing trellises, and overhangs contribute substantially to the energy savings.

Centex developed the house as part of the Department of Energy's Net Zero Energy Homes project, launched in 2001. The department has provided funding to four design firms—Davis Energy Group; ConSol of Stockton, California; the NAHB Research Center in Upper Marlboro, Maryland; and Steven Winter Associates of Norwalk, Connecticut—which in turn have worked with Centex and several other builders. The pilot program encourages construction companies nationwide to put elements of net-zero technology in their new houses. "We are looking at developing entire communities that focus on energy-saving features," says Joyce Mason, vice president of marketing at Pardee Homes of Los Angeles. Buyers who purchase a house from Pardee today can choose from a checklist of energy-conserving options that include high-efficiency fluorescent lighting, photovoltaic cells, a tankless hot-water heater, and an insulated precast concrete foundation.

In Tucson's historic Armory Park neighborhood, John Wesley Miller is constructing a community of 99 solar-powered Mission-style houses that use up to 80 percent less energy than the surrounding houses yet sell in the low $200,000s. Brian Bombeck, president of the Sacramento Land division of U.S. Home, is overseeing a grand plan to install solar roofs on nearly half the 1,880 houses in a development near the California state capital. That community could generate as much electricity as a two-megawatt power plant. The project is part of a trend for home builders in the area to offer photovoltaic systems on new houses. "I think it will evolve over time to where it will become a standard feature," Bombeck says.

Over the long run, net-zero technology may bring solar power into the American mainstream. Utilities have been reluctant to invest in alternative power sources of unproven economic viability. The companies that manufacture photovoltaic cells have been waiting for an expanding market and new technologies to drive down the costs of their products. The net-zero approach could break that impasse by letting individual homeowners make the decision to go solar.

Centex's zero-energy house provides a preview of what this peaceful revolution might sound like. On a hot summer day, only one thing seems out of the ordinary: The rooms are oddly quiet because Night Breeze eliminates the normal background noise of an air conditioner. The sounds of silence make it easy to forget that the Los Olivos house is also a miniature power plant, churning out pollution-free electricity.

The biggest challenge in selling a house that generates as much electricity as it pulls from the grid is that the cost savings require a buyer to live there a long time. Centex Homes reports that photovoltaic arrays and a full complement of energy-efficiency upgrades will increase the price of a luxury house by about $30,000. That premium would take at least 15 years to pay off in reduced utility bills, although a higher resale value might make such calculations irrelevant.

"Studies show people are interested in this technology, but we're not seeing that when it comes time for people to open their checkbooks," says Jeff Jacobs of Centex.

For municipal buildings, the numbers can be more favorable. Micheal Nelson of Washington State University cites a $60,000, 10-kilowatt solar installation at a central Washington community college that earns the school up to $14,200 a year by selling electricity to the local utility.

All cost estimates are complicated by regulations that vary from region to region. In Sacramento, California, tax incentives cut the cost of a solar-cell array by up to 75 percent; yet other sunshine-intensive states, including Florida and Arizona, provide no incentives.