Unintended Art of the Anthropocene: The Sound of Ice Melting 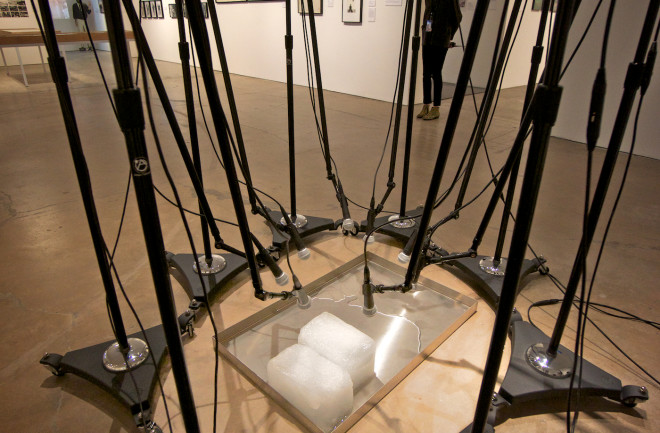 A conceptual art piece by Paul Kos, "The Sound of Ice Melting," photographed at SITE Santa Fe on March 23. (Photograph: © Tom Yulsman. With permission of the artist) You may have noticed that I've been out of action for a week. That's because I was on a short spring break getaway to New Mexico — where I saw this piece of conceptual art by Paul Kos. He produced the first version of this piece in 1970, so he could not have thought of it in this way, but I think it is a perfect artistic symbol for the unfolding Anthropocene Epoch. (If you're not familiar with that term, see my explanation of it in my first ImaGeo post.) Titled "The Sound of Ice Melting," the work consists of two 25-pound blocks of ice, eight standing boom microphones, an aging analog amplifier with audio mixing board, and speakers. I photographed it at SITE Santa Fe, where new blocks of ice are set out every day. Yes, the microphones are turned on. They are picking up something... It has been called "absurdist," but in the sense of a Zen koan, such as this one:

Two hands clap and there is a sound. What is the sound of one hand?

The idea is to transcend a rational, intellectual consideration of the issue and experience it on a deeper, more meditative plane.

The original installation from 1970. Click on the thumbnail to see the image at full size. (Courtesy Gallery Paule Anglim) So I am now going to completely violate this idea by saying that for me, the Sound of Ice Melting wasn't at first a visual koan. Engaging in my own intellectualizing, I found it to be a visual metaphor for the melting of Earth's cryosphere resulting from global warming — and the fact that scientists are monitoring every creak, crackle, trickle and gush of the planet's glaciers and ice sheets with satellites, airborne surveys, ground measurements, and modeling. In real time, just like the microphones listening intently to the ice melting in Kos's installation. NASA alone lists 12 separate science missions intended to study the cryosphere, the Earth's frozen realm — snow, glaciers, ice sheets, sea ice, frozen ground, etc. Eleven of these are current or planned satellites that monitor the cryosphere remotely. Another is Operation Ice Bridge, the "largest airborne survey of Earth's polar ice ever flown," according to NASA. This year's Arctic flight campaign began just a week ago, on March 20, with a series of science flights north of Greenland, across the Arctic Basin, and north of Alaska. As they listen in, so to speak, with all those instruments, what are scientists finding? An enormous amount of data has been collected at different times and places by many different kinds of instruments. Creating an accurate picture from so many puzzle pieces has been an enormous challenge — perhaps as daunting as trying to discern the sound of ice melting amidst the incessant white noise of our world. But last November, a team of 47 scientists reported that they had analysed 20 years of data from 10 satellite missions, along with data from modeling efforts, to produce the most accurate estimate of just how much ice in Greenland an Antarctica is melting. Here's a summary from Richard Kerr's story at the time in Science:

The globe's icy bottom line: a current annual loss of 344 billion tons of glacial ice, accounting for 20% of current sea level rise. Greenland's share—about 263 billion tons—is roughly what most researchers expected, but Antarctica's represents the first agreement on a rate that had ranged from a far larger loss to an actual gain. The new analysis, published on page 1183 of this issue, also makes it clear that losses from Greenland and West Antarctica have been accelerating, showing that some ice sheets are disconcertingly sensitive to warming.

Even if inadvertently, the blocks of ice melting in the bottom of the tray surrounded by all those microphones in Paul Kos's installation symbolize this situation evocatively. With that in mind, I asked Kos if he had any thoughts about this re-interpretation of his work. Here's the email message he sent back:

Click to watch Paul Kos's video. Dear Tom, If you go to my website: paulkos.net and look for the video; ICE MAKES FIRE 1994-2004, and see the clip, it is my surrogate for language when it comes to talking about ice. Good luck, Paul