An Italian fisherman got creative in his effort to prevent trawlers from destroying local fish stocks. 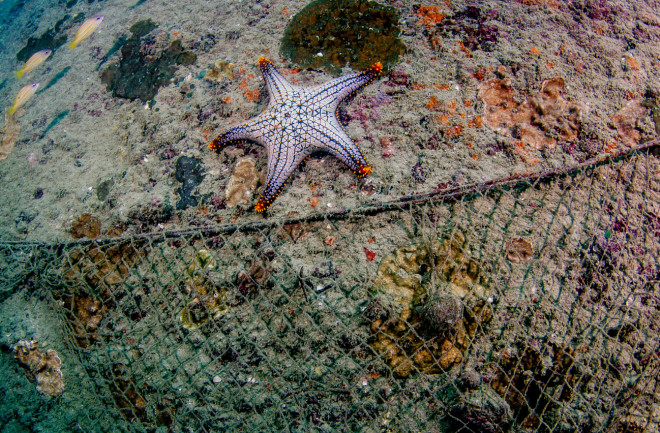 Paolo Fanciulli was a fisherman with a chip on his shoulder. Like many artisanal fishermen in the Mediterranean Sea and elsewhere, the fish stocks that he relied on for a living off the Tuscan coast of Italy had been depleted by illegal trawler ships that came in close to the coast.

Small-time fishers like Fanciulli couldn’t compete with these ships, which gathered everything in the area and then left it barren for years. “I understood that the success of my fishing activity was intrinsically linked to the good state of the environment,” says Fanciulli, who spoke to us with the aid of a translator.

Trawling is a fishing method that involves dragging a weighted net along the seafloor behind the boat. It’s an indiscriminate catch-all method that can be very profitable. “At the beginning when you start fishing with trawl nets, you get a lot of benefits,” says Ricardo Aguila, senior adviser and expedition leader at the nonprofit conservation organization Oceana.

But fish stocks in an area quickly decline from trawling, for a number of reasons. The method sometimes captures endangered sharks or turtles along with the intended fish targets. It captures young fish that haven’t grown large enough to be marketable, knocking out multiple generations in an area and depleting an area’s stocks for years to come. Trawling nets also ruin the infrastructure of the seafloor as they drag along the bottom.

Trawling is legal in some places, but often banned where there is sensitive coral, seagrass or other features on the seafloor that could be damaged, Aguila says. In Italy, trawling is also illegal within three nautical miles of the coast. But not all trawlers care about this. When one area becomes depleted, they simply move somewhere else — sometimes even to places where the practice is illegal.

Artisanal fishers like Fanciulli, on the other hand, tend to use smaller, more selective nets or fishing lines. Their operations are usually small, and have lasted for generations in many areas. “They want to keep a healthy ecosystem,” Aguila says.

In Talamone, Fanciulli’s native village in Tuscany, the fisherman wanted to do something. He had tried protesting, but ran into problems with local criminals linked to the illegal trawling who made “threats to my safety,” Fanciulli says.

He began to think of other ways to deal with the issue. The government dropped a few concrete blocks in the ocean, but they were too sparsely placed to block the trawling nets. So Fanciulli dropped some more. Then artists and a local quarry got involved, donating large sculptures to drop in the water.

“One of the most effective solutions is to physically prevent trawling through artificial reefs,” Fanciulli says. “So I started working on this project, trying to combine the protection of the seabed with something that could also give an added value to our environment, something as beautiful as a sculpture.”

Concrete blocks — or sculptures — can break weighted trawler nets that get caught up in them, so are a significant deterrent. They can also act as artificial reefs, providing corals, sponges and other sea life a place to latch onto, and as hiding places that Fanciulli says reduce the mortality of juvenile fish and crustaceans. The underwater museum even provides different kinds of shade and lighting, and can affect temperature around them, allowing more species to thrive.

“In recent years, thanks to the submerged sculptures, some species that we have not seen for some time have returned, such as groupers and lobsters,” he says. For Fanciulli, who began running fishing tours for tourists some time ago, this also has an economic component. Not only do the sculptures improve fish stocks for artisanal fishers, but they create an “extraordinary environment for divers,” he says.

There are currently about 40 sculptures in the water off Talamone, as part of his ongoing “House of Fish” project. The goal is to ultimately drop 100 sculptures with the help of donations and other efforts.

From the Bottom Up

Aguila thinks the endeavor would be difficult to apply everywhere, given the small size of sensitive marine habitats around the world’s seas. “It’s a good thing,” he says, “but it’s not something you can do all over the Mediterranean or all over the world.”

In the Mediterranean alone, 90 percent of fish stocks are in bad condition due to overfishing — often because of trawling, Aguila says. Fanciulli and others have dropped concrete blocks or created underwater museums to successfully block some areas, but “the problem here really is that the governments are not protecting these areas,” Aguila says.

This doesn’t happen for a number of reasons. Many trawling operations have a lot of money and influence, whether legal or illegal. In some places, “when you look behind [illegal trawling], it’s organized crime,” Aguila says.

But small, artisanal fishers can help to solve the problems, he says, whether through identifying the areas that most need protection or actively monitoring the seas for illegal trawling boats. Fighting these trawlers sometimes feels like the enduring battle to slow climate change, but there has been progress in stopping them in some places.

“I think that it’s getting better,” Aguila says.

Special thanks to Alessandro Lucchetti, who provided translation services.