Two satellite images of Tropical Cyclone Ita alternate in this animation. Captured by the VIIRS instrument on the Suomi NPP satellite, the images show the storm just before it made landfall on Australia's Queensland coast on April 11, 2014. (Source: CIMSS Satellite Blog) After making landfall in Queensland, Australia on Friday, April 11 as a category 4 storm, Tropical Cyclone Ita has been lashing coastal areas between Cairns and Townsville with heavy rain and gale force winds, including gusts up to 60 miles per hour. Despite having remained mostly over land since landfall, Ita's cyclonic structure has remained fairly intact, and its center of circulation is still "tightly wrapped," according to the Joint Typhoon Warning Center. Moving south-southeastward at about six miles per hour, the storm is expected to track right along the coast through the weekend before heading back out to sea on Monday. (For Ita's predicted track, click here.) The animation above shows Ita just before landfall, as seen by the VIIRS instrument aboard the Suomi NPP satellite. The more natural looking image comes from the instrument's "day-night" band, which is sensitive to light in wavelengths ranging from green to near-infrared. It clearly shows towering clouds around the eye of the storm. At about the 1 o'clock position around the eye, some portions of the clouds have shot up all the way through the troposphere, the layer of the atmosphere where most weather happens, and into the stratosphere. This "over-shooting cloud top" phenomenon indicates that a storm is quite powerful. That's because it takes an enormous amount of energy to propel a cloud through the boundary between the troposphere and stratosphere. 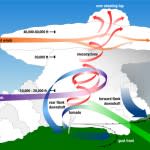 Source: Wikimedia Commons That boundary is responsible for the flattened tops of thunderstorms. When warm air rising in a thunderstorm reaches this cap, it spreads out, forming a classic anvil shape. But if the rising air has enough momentum, it can punch through the cap, forming a dome above the anvil. To see what this looks like in the kind of supercell thunderstorm that often produces tornadoes, click on the thumbnail at right. The thunderstorm clouds swirling around Ita's eye rose to very high elevations in the atmosphere. You can can discern the relative heights of these clouds in the brightly colored image. It shows Tropical Cyclone Ita in the thermal infrared portion of the electromagnetic spectrum. Invisible to our eyes but not to VIIRS, this light is indicative of temperature — and the higher a cloud climbs in the troposphere, the colder it gets. In the VIIRS infrared image, magenta is indicative of temperatures as cold as negative 90 degrees C. (That's an astonishingly frigid -130 degrees F!) These are the storm's highest clouds. Next coldest are clouds indicated by colors in gray tones to black, which are between -70 and -80 degrees C. (Grays are colder than black.) These are followed by red, orange and yellow, which are still plenty cold, and therefore very high in the atmosphere. Australia is nearing the end of its cyclone season, which ends on April 30th. But cyclones do sometimes occur after April 30th. Meanwhile, as the warm season progresses in the Northern Hemisphere, what's in store for the Atlantic Ocean? On Thursday, April 10th, Philip Klotzbach and William Gray of Colorado State University issued their extended forecast of Atlantic hurricane activity. Here's the abstract of their report:

We anticipate that the 2014 Atlantic basin hurricane season will have below-average activity compared with the 1981-2010 climatology. It appears quite likely that an El Niño of at least moderate strength will develop this summer and fall. In addition, the tropical Atlantic has anomalously cooled over the past few months. We anticipate a below-average probability for major hurricanes making landfall along the United States coastline and in the Caribbean. Despite the quiet forecast, coastal residents are reminded that it only takes one hurricane making landfall to make it an active season for them. They are reminded to prepare the same for every season, regardless of how much or how little activity is predicted.

So if you live along the coast, don't be complacent!