Whales attracted to commercial fishing operations and other human activities can wind up in real trouble. A young Norwegian researcher is trying to help. 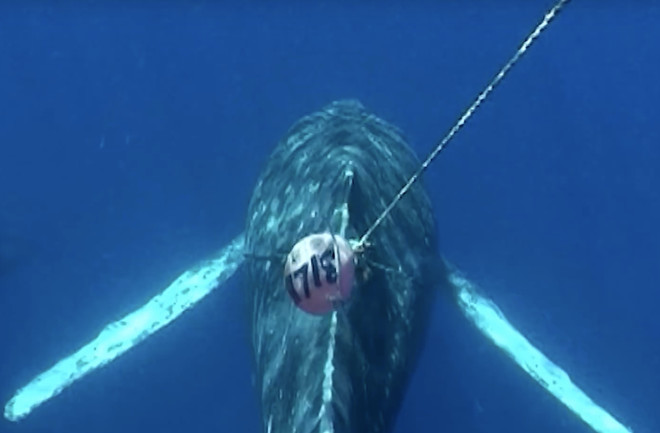 A whale entangled in fishing gear. This can impair a whale’s ability to find and eat food, to maneuver and swim, and even its ability to reproduce. (Credit: NOAA)

We humans have a few things in common with whales. Among them: curiosity, and a taste for fish.

Unfortunately for whales, that commonality can get them into trouble. Thanks to their curiosity, they’ll explore and interact with things they find in the environment, including nets and other fishing gear. And whales that eat fish can become attracted to commercial fishing operations — with potentially deadly consequences.

A killer whale eyes fish captured in a net along the coast of Norway. (Credit: Evert Mul)

In both cases, whales can become entangled in ropes, nets and other gear. An entangled whale can have trouble finding and eating food, maneuvering in the water, and even reproducing, according to Sarah Wilkin, coordinator of a National Oceanic and Atmospheric Administration program aimed at helping marine mammals.

“For some species, such as the North Atlantic right whale, populations are so reduced that the loss of even a few individuals can have dire consequences for the entire population,” she says.

What might be done to give whales a better chance? Evert Mul, a PhD candidate at UiT-The Arctic University of Norway, is conducting research that could help provide answers. His approach: track whales by satellite to document the degree to which they are actually lured to fishing operations and other human activities, and ultimately to use that data to find ways of helping whales stay out of trouble.

Evert Mul is tagging whales and using a satellite-based tracking system to learn how much they are attracted to fishing operations and other human activities. (Credit: Audun Rikardsen)

Mul explained his approach to fellow scientists at the recent Arctic Frontiers conference in Tromsø. He is studying killer whales “that mostly live in Norway but may go on holiday to Iceland,” he joked. He also studies humpback whales, which migrate from coastal Norway to the Caribbean or the Cape Verde Islands.

Unfortunately, in fall and winter the whales tend to feed on the same fish that many fishermen are after: copious schools of herring.

The fishermen use purse seine nets that can be 300 feet in diameter. As part of their operations, they will bring their nets closer and closer to the surface, pulling them inward at the same time, thereby concentrating the fish in a smaller and smaller space. For some whales, “this can be an easy meal,” Mul says.

And a very risky one too: “A killer or humpback whale can become entailed or caught in a fishing net,” Mul says. When a whale becomes entangled, the net can be released. But this results in a huge financial loss for the fishermen. And very often, the whale is not able to get free and ultimately dies anyway.

But are the whales particularly attracted to fishing operations, or do they encounter them more or less by chance? The answer can help guide efforts to reduce encounters, Mul believes.

To find answers, he and his team tag whales with small satellite transmitters that communicate with the Argos network of polar orbiting satellites. The spacecraft pick up the signals, and then relay the information back to receiving stations on earth.

In this way, Mul has been able to track the movements of 30 humpback and 45 killer whales, and compare them to the movement of commercial fishing boats.

The tracks of whales tagged by the Whaletrack program of UiT-The Arctic University of Norway. (Credit: Evert Mul)

An animation produced by Mul and his colleagues depicting some of the results so far is quite revealing: The killer whales in particular seem to follow the fishing activity very closely. When fishing boats begin operations, killer whales converge. When they move to new spots, the whales follow.

“It appears that the killer whales very much react to the fishing activity,” Mull says.

Many killer whales have converged to feed as a fishing net is brought in. (Credit: Evert Mul)

The still-ongoing research, a combined effort of his university and the Norwegian Institute of Marine Research, shows “how animals respond to human activity, and what kind of risks that brings along,” he notes. The hope is that it can help “identify when, where, and what to do in particular places.”

For example, shifting fishing activities to different times and places could theoretically help, Mul says. Fishermen could also think about ways to scare whales away from their nets.

“My biggest achievement would be if I could communicate the results of my study to people who make decisions about planning of human activities,” he says.