Other researchers are reconstructing climate history from a different sort of animal: impressionist artists. By analyzing the vivid colors in paintings by such artists as J.M.W. Turner, Claude Lorrain, Alexander Cozens, and Edgar Degas, some scientists hope to say something significant about volcano-related cooling--and possibly human-induced pollution--over the past few centuries.

The scientists studied works painted around the times of major volcanic eruptions, such as the cataclysmic explosion of Mount Krakatoa in 1883, to measure how much pollution was pumped into the skies. Contemporary accounts describe brilliant sunsets after Krakatoa erupted. “The initial idea arose from the fact that we saw an increased reddening of colors in sunsets which followed large volcanic eruptions, particularly Krakatoa,” [Christos] Zerefos, [who led the research at the National Observatory in Athens] said. [MSNBC]

After examining over 500 paintings, and designating 54 of them as "volcanic sunset paintings," due to the year in which they were painted, the scientists discovered the these volcanic paintings were also the paintings with the greatest red to green ratio. In other words, there seems to be a concrete link between the vibrant colors and the fact that the paintings were created shortly after a volcanic eruption.

As they continue their research, the scientists hope to find ways to better track volcanic-induced cooling and environmental pollution, though some researchers are quite skeptical about this technique:

James Hamilton, the curator at the University of Birmingham, who has written books on Turner, said that while Turner claimed to paint what he saw, it’s dangerous to put too much weight on an artist’s interpretation. “They (artists) are not making absolutely clear and accurate records of what they can see,” he said. “It’s very hard to tell when artists are being absolutely accurate and when they’re using vivid sky as a platform to more vivid painting.” [MSNBC]

While some climatologists study tree rings to decode the history of climatic change, others are scrutinizing a different kind of tree record: century-old forest photographs.

By comparing contemporary photos with shots from a century ago, "you can literally see that trees are leafing out and the plants are flowering earlier now," says [Richard] Primack, of Boston University. [DISCOVER Magazine]

In a study published in the American Journal of Botany, Primack and his colleague, Abraham Miller-Rushing, discovered something interesting after analyzing 286 century-old photographs of Concord, Massachusetts, and Boston's Arnold Arboretum: The leaves are coming out 10 days earlier on average than they did a century ago.

"These kinds of changes are already being seen in Boston, and they will be seen in the rest of the United States in the next 100 years," he says. "We're going to see enormous changes in the distribution of plants and animals, agricultural patterns, and patterns of rainfall." Some plants may even begin flowering before pollinators are around to fertilize them. Hay fever could blossom, too, cautions Primack: "Plants may have a longer season of pollen production, which may extend the allergy season." [DISCOVER Magazine] 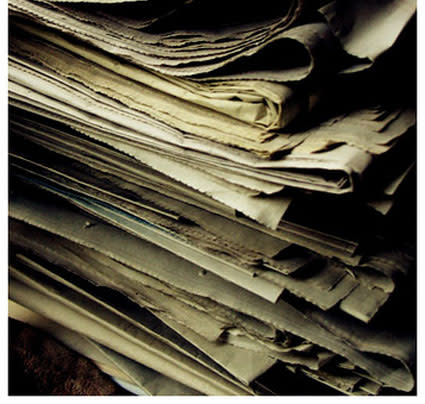 Tasked with studying climate change from the Victorian period onward, one researcher decided to bypass the tree rings method altogether, aiming instead to analyze a common tree product: paper. The advantage in studying paper is that, because paper is a mishmash of trees, it's like having dozens of trees at your disposal. And if you're studying newspapers, each 'tree' even has its own stamped date---all the better to make precise, decades-long climate comparisons.

It was this idea that led Dan Yakir, a biogeochemist at the Weizmann Institute in Israel, to enlist the help of the Boston Globe by sending him snippets of old newspapers dating back to 1872.

Yakir burned more than 100 Globe samples at 2,000 to 2,200°F in a super-oxygen-rich oven, letting the carbon in the paper combine with the oxygen to make carbon dioxide. He then measured the carbon from the exhaust and used a mass spectrometer to determine its isotopic composition, particularly a key marker of fossil-fuel burning, carbon-13, and compared with to carbon-12. In this experiment, he was piecing together the story of the air that the trees were “breathing in” by photosynthesis each year. When the ratio of carbon-13 to carbon-12 goes up or down in the atmosphere, so does the ratio in the trees. That’s what was reflected in the newspaper snippets. [Popular Science]

His findings reveal just what we'd expect: The levels of carbon increase over time. Because these results corroborate what we've known all along, this means that newspapers serve as a valuable record of climate change---a finding that gives many other scientists high hopes.

Steven Leavitt, who heads a tree-ring lab at the University of Arizona, says that the advantage to Yakir’s research lies in the “newspaper samples probably representing many trees perhaps over a wide area, thereby smoothing out variability associated with differences among individual trees.” [Popular Science]

Some researchers have recently started tracking how climate change with an assist from an unlikely helper: the termite. The scientists are inferring climate history by noting the number and location of the termites' mounds, where their colonies set up show.

Termite mounds in Africa wax and wane according to annual rainfall, they discovered, allowing their use as a predictor of ecologic shifts due to climate change. [USA Today]

The scientists from Carnegie Institution's Department of Global Ecology discovered this after mapping over 40,000 termite mounds in Kruger National Park in South Africa, and identifying three main ecosystems in the region: the dryer upslopes; the wetter downside slopes; and the medium-watered, termite-mounded soils.

"By understanding the patterns of the vegetation and termite mounds over different moisture zones, we can project how the landscape might change with climate change," said Greg Asner, a scientist at Carnegie. [Carnegie Institute]