This started as a story about really cool clouds on Earth, but then it led to this: Does it snow on Mars? 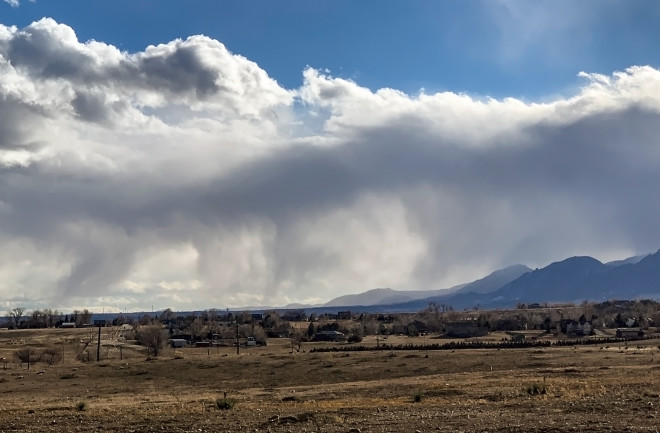 Snow falling from clouds near Boulder, Colorado on Dec. 19, 2018 did not reach the ground — a classic example of virga. (Photo: ©Tom Yulsman) Mars is certainly cold. With temperatures that can plunge to more than negative 100 degrees Celsius, it's bloody frigid! But as cold as it might get, does it snow on Mars? This wasn't the first thing that came to mind when I photographed the scene above near Boulder, Colorado with my iPhone. But when I got home and started investigating the beautiful phenomenon I had documented, I eventually came around to that rather un-obvious question. How I came to it — as well as the answer — is a bit of an interesting journey, so I hope you'll keep reading. First, what about those clouds in the image above? If you live somewhere with wide open vistas, you've probably seen the phenomenon yourself: darkish streaks appearing to hang from a cloud deck. This is called "virga" — precipitation falling from the clouds but mostly not reaching the ground. I've seen virga many times before, but usually in summer. This is when temperatures are high and humidity near the surface can be relatively low, causing shafts of rain falling from clouds to evaporate before the drops reach the ground. But I shot the photo above on December 19th, two days before the winter solstice and well into meteorological winter. At the elevation of the cloud deck, temperatures were almost certainly well below freezing. So the virga probably consisted of little ice crystals. As they fell toward the ground, they simply sublimated — meaning they went from the frozen state to water vapor without first condensing into liquid. I decided to write a post about it here at ImaGeo, and as I did my research, my mind wandered far from Colorado. All the way to Mars, which I knew had its own clouds. I began wondering whether Martian clouds feature ice crystals streaming downward to form virga. Do ice crystals actually reach the ground as snow? And what might all of this look like from the surface? I haven't been the only person to think about these things. In their quest to confirm that frozen water exists on the surface of Mars, and also to learn the role it has played in the planet's geologic history, scientists have sought answers to those very same questions. Among them is Jim Whiteway of the Centre for Research in Earth and Space Science at York University in Toronto. He led a team of Canadian researchers that used observations from NASA's Phoenix spacecraft to address those questions. Scientists have known for quite some time that water clouds do indeed form in the Martian atmosphere. You can see it for yourself in the images that follow.

On June 26, 2001, the Earth-orbiting Hubble Space Telescope captured this image showing clouds on Mars. But with those clouds, does it snow on Mars? Another spacecraft, the Phoenix lander, provided an answer. (Source: NASA/STSci) In the Hubble Space Telescope image, frosty, bluish-white water-ice clouds are clearly visible, particularly in the polar regions.

These four images show the north polar region of Mars during the northern summer season. Each picture was taken about one Mars year apart, and each shows a cloud located over the same terrain near the Martian ice cap each summer. The image in the upper left corner was acquired by the Hubble Space Telescope, the others by the orbiting Mars Global Surveyor. (Source: NASA/JPL/Malin Space Science Systems) The images above offer a closer view, showing a swirling cloud feature that recurs near the icy north polar ice cap every year. "Water at the poles sublimates into the atmosphere, and then it comes back in winter," Whiteway observes in a 2012 presentation that was posted to Youtube. But it had been assumed that because the Martian atmosphere is so thin, any ice crystals that might form into clouds would be very tiny — so much so that they would "just stay suspended and wouldn't snow to the surface." But is this actually true? The project to land the NASA Phoenix spacecraft on Mars provided an opportunity to test this idea. Whiteway and his colleagues built an instrument for the spacecraft that works much like a radar. But instead of using radio waves, it was designed to shoot beams of laser light up into the atmosphere and then measure the light reflected back down to the surface by dust and clouds. Thus, the instrument's name: lidar. Phoenix landed on Mars in 2008. It's primary mission was to confirm that Mars did indeed harbor large amounts of water in the form of ice, mostly locked away in the soil. With this in mind, controllers directed Phoenix's robotic arm to aim a camera underneath the spacecraft. And there it was: patches of white ice uncovered by the spacecraft's thrusters as it was landing. But NASA wanted hard evidence — which was soon secured when white stuff recovered by the robotic arm was chemically analyzed on board Phoenix. Sure it enough, it was water ice. Whiteway and his colleagues, however, were interested in the role clouds play in the Martian hydrologic cycle. Does precipitation fall from those clouds, and if so, does it reach the surface? To find answers, they fired up the lidar instrument. Here's a key example of what they found:

An instrument aboard the Phoenix spacecraft recorded evidence of "fall streaks" — hook-shaped virga — on Mars. (Image courtesy Jim Whiteway, Centre for Research in Earth and Space Science York University, Toronto) In this image, you're looking at something akin to a cross section of a cloud between about three and four kilometers up in the atmosphere. "The lidar showed the outline of the cloud and its internal structure as it drifted by," Whiteway says. The features labeled "fall streaks" are a form of virga — in this case, ice crystals forming at about 4 kilometers up and dropping down to about 2.5 kilometers. "It took three or four hours to drop," Whiteway says. The very tiny particles were very similar in size to ice particles associated with cirrus clouds on Earth. Now, scroll back up to the beginning of this post and compare the features in my iPhone photo of the virga near Boulder to this lidar image. The similarity is pretty obvious. Here's what fall streaks look like on Earth as measured by lidar:

Image courtesy Jim Whiteway Once again, the similarity is uncanny. Mind you, the virga I photographed were not falling from a cirrus cloud per se. But even so, the phenomenon at its most fundamental level is basically the same. "From the viewpoint of a lidar, the atmosphere of Mars was similar in many ways to the Earth’s atmosphere — the dust as well as the clouds," Whiteway told me in an email message. The clouds his team's instrument detected were forming at about the same temperatures in which cirrus clouds form here. "So it’s not surprising that the lidar measurements of clouds on Mars look similar to lidar measurements of cirrus clouds on Earth." And not just in lidar measurements. Check out this time-lapse video showing clouds scudding along the Martian horizon, as seen by a camera on the Phoenix spacecraft: https://youtu.be/JAT-2Kv_ig0 Watch the circled cloud carefully and you may be able to see faint wisps of ice crystals precipitating toward the surface. (This video is a short snippet from the full 2012 presentation by Jim Whiteway I mentioned earlier. For a more detailed look at the science, make sure to check out the presentation here: https://bit.ly/2Ss9Zy7 ) So, we've got virga on Mars. And in lidar measurements and even photographic imagery, they look just as they do here on Earth. But that still begs the question: Do the ice crystals in Martian virga ever reach all the way down to the ground? In other words, does it snow on Mars? This lidar imagery answers that question:

Lidar imagery acquired by NASA's Phoenix lander in 2008. (Courtesy Jim Whiteway) The panel on the left reveals a cross section of sorts of an ice fog hugging the surface, as well as a cloud above 3 kilometers in the atmosphere. The panel on the right shows what happened about an hour and a half later. Fall streaks have formed, and these ribbons of ice crystals are indeed falling all the way to the surface. "This is our evidence that it does snow on Mars," Whiteway says. Now that he and his colleagues have confirmed that precipitation is part of the hydrological cycle on Mars, scientists must reassess their theories for how large amounts of water ice accumulated beneath the surface over the course of the planet's geologic evolution. Beyond the science, I had one more question: What would snow falling on Mars look like? According to Whiteway, it would look like the phenomenon of "diamond dust" seen in the frigid environments of the Arctic and Antarctic, in which ice crystals appear to fall out of a clear sky. As he puts it, "If you were standing on the surface of Mars, and you looked up while this was occurring, you could see through these clouds, you could still see the stars, and you'd see the odd shimmering, sparkling ice crystal that's falling down." Wouldn't it be cool to see that?