This past July was the hottest of 1,639 months on record

Even though the El Niño warming episode is over, Earth's heat streak is continuing. Big time. Both NASA and NOAA have released their verdicts for global temperatures in July (NASA's here, and NOAA's here). And both concur that it was the hottest such month on record. Since July is typically the warmest month of the year globally, that means it was the hottest of all 1,639 months on record. Let us count other ways in which July 2016 was noteworthy: 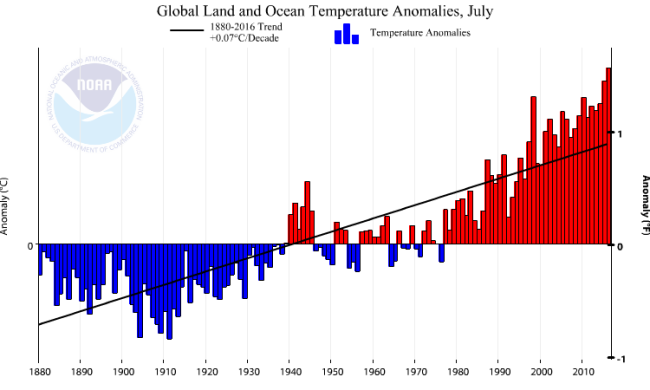 This graph shows how global average temperatures during each July since 1880 have varied from the long-term average. (Source: NOAA) El Niño gave a boost to global temperatures during the past two years. But it's gone. Yet the heat doesn't seem to be relenting. I just have to say that I find this more than just a bit unsettling.