Researchers have developed a novel wireless device called Cryoegg to peek into melting glaciers. Recent tests have revealed that it can transmit data through more than 4,000 feet of ice. 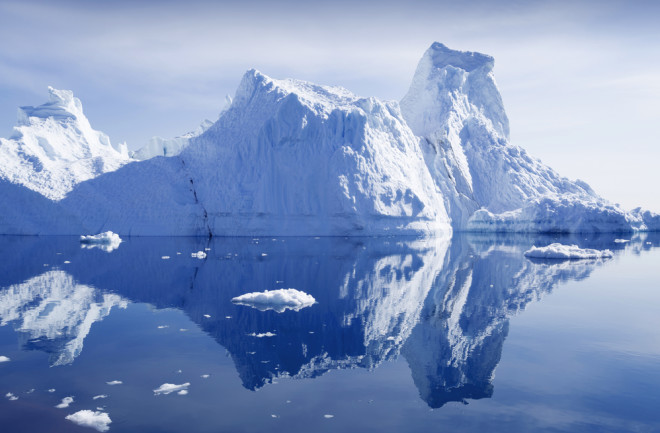 On a rainy day in July 2019, Michael Prior-Jones spent eight hours slip-sliding across a  Greenland glacier. To help a colleague test the conditions deep beneath the ice’s surface, he played an intricate game of cat’s cradle with over 3,000 feet of wire cable. Pacing back and forth, he placed the cable on the ice to smooth out tangles and attach sensors that help indicate the speed at which the glacier is melting and moving toward open water. By the end, he was cold and soggy, but the wire was snarl-free and prepped for its descent into the glacier. Now, the real work could begin.

For decades, researchers like Prior-Jones have affixed instruments to cables, dropped them down cracks and boreholes, and analyzed the data that streams back through the wires. By extracting secrets from the depths below, scientists aim to understand the channels that meltwater carves on its way from the glacier’s surface to the bed of the ice, and then out to sea.

If the meltwater can access the glacier bed, it forms a lubricating film that slides the ice toward the ocean. Once it reaches open water, the glacier melts and thins — potentially hastening sea-level rise as the climate warms. For example, the Greenland Ice Sheet is skirted by glaciers, and if the sheet melts entirely, it would heighten global sea-level rise by about 23 feet.

Glaciologists’ work is critical because the relationship between these inner meltwater channels and the fate of glaciers (like those flowing from the Greenland Ice Sheet) remains poorly understood — a key mystery in predicting how the world’s oceans will change. Gauging characteristics of the meltwater such as its pressure, temperature and electrical conductivity reveals just how quickly we can expect glaciers to disappear and add to global sea-level rise.

But collecting these crucial measurements is no small feat: Stringing sensors on wires is a common means to this end, but cables can be cumbersome. They can become tangled and eventually stretch, freeze and break inside the borehole. This happens because, as Prior-Jones explains, a glacier is like an old house with noisy plumbing hammering the walls — if that plumbing were ever-changing. New cracks and cavities constantly appear and disappear as the melt supply waxes and wanes.

Prior-Jones was well aware of the frustrations associated with the traditional data-collection methods before his day of cat’s cradle. His Greenland experience therefore underscored his professional mission: to avoid cables at all costs.

That’s why he has teamed up with fellow Cardiff University researcher, Liz Bagshaw, to develop a wireless subglacial probe — leveraging the same radio technology from utility meters that some countries employ to report gas and water usage. Although it’s fondly named Cryoegg, the instrument is more akin in size, shape and weight to a grapefruit. Researchers will lower it into a crack or borehole and set it free to bump along the glacial “plumbing” that carries the lubricating meltwater to the bed and eventually to the sea. Along its journey, the new and improved model will eventually transmit hourly pressure, temperature and electrical conductivity measurements to an antenna at the surface for a year. Best of all, there are no strings attached.

This free-range egg was the brainchild of glacial biogeochemist Jemma Wadham and aerospace engineer Stephen Burrow at the University of Bristol, where Bagshaw completed her postdoctoral research. While working with Wadham and Burrow, Bagshaw studied glacial drainage using “drifter” sensors that float along sans cable. Unfortunately, they were not equipped with a wireless transfer system like Cryoegg. Sometimes, the sensors would remain caught inside the ice, chirping away as they collected measurements that would never see the light of day. “That was the point that made me think, ‘We need to get serious about this data transfer,’” Bagshaw says.

By 2013, the Bristol team and Bagshaw had a rough prototype to begin elucidating the dynamic environment contained within the ice. It couldn’t have been more timely: During Cryoegg’s development over the last decade, the Greenland Ice Sheet has lost over 2,000 gigatons of ice.

In the summer of 2019, Bagshaw and Prior-Jones first tested their newest design with three trials across Greenland and Switzerland. In a study published in the Journal of Glaciology, they demonstrated that Cryoegg could transmit important data through more than 4,000 feet of ice. While the borehole doesn’t yet connect to subglacial water channels, it’s a significant milestone for climate change research.

During its subglacial dive, Cryoegg measures temperature to indicate whether there’s liquid water present, as well as electrical conductivity to signify the amount of dissolved minerals. This reveals the meltwater’s speed: If the meltwater is flowing quickly, it will be relatively pure. But if it’s stagnant, the water spends more time interacting with the bedrock, dissolving more minerals and increasing conductivity.

The egg’s pressure data may be the most telling of all. If the pressure is relatively high, there’s likely a lot of meltwater pooling in the bed’s cavities, forming the lubricating film that propels the ice. During melt season, the water tunnels beneath the glacier, alleviating the pressure and decelerating the glacier’s glide toward open water. The Cryoegg’s pressure measurements can help researchers infer the structure of this hidden drainage system, and how the meltwater streaming down from the surface will hasten the glacier’s journey to the sea.

While Cryoegg’s spherical shape makes it ideal for rolling along with the meltwater and withstanding pressure, it’s the wrong fit for most electrical components. Bagshaw and Prior-Jones jokingly call this conundrum an engineer’s “worst nightmare,” so they’re still resolving design vulnerabilities.

In addition to combating leakage issues — and one test run where the egg was too big for the borehole — the researchers are also working with a relatively inefficient data-transmitting antenna, because it’s the only one short enough to fit inside the spherical case. Although their Greenland trials demonstrated that Cryoegg could wirelessly transmit data through more than 4,000 feet of ice, it was still over half a mile short of reaching the bed of the Greenland Ice Sheet at their testing location. This would involve transmitting data 1.5 miles through the ice, a goal that may require a larger receiving antenna situated on the surface of the glacier. Another wireless subglacial probe called WiSe reached these depths about a decade ago, but the project has since disbanded. The only other wireless probe currently in use, Glacsweb, reaches a transmission range of merely 230 feet, because its primary aim is to analyze the sediment below relatively thin glaciers.

With most other glaciers, Cryoegg’s transmission record of more than 4,000 feet would be more than enough to reach the bed, according to Thomas Schuler, a glaciologist at the University of Oslo and The University Centre in Svalbard who was not involved with the study. He says it would be “an enormous step forward” to have a wireless device like Cryoegg for traversing perilous glacier interiors. But, short of erecting a trail of receiving antennas across the ice, the question remains how best to track the egg once it’s on the move.

To help solve this problem, Schuler is currently working with graduate student Andreas Alexander and colleagues from the Centre for Biorobotics in Estonia to craft “intelligent” drifters that chart their own coordinates. These cylinder-shaped devices carry several sensors, including those that record information about inertia, which can later be used to reconstruct meltwater flow paths that are inaccessible via GPS signal. Although the prototype is still in early development, Schuler and his group have spoken with the Cryoegg researchers about collaborating to glean even more detailed information about subglacial channels.

For now, half a mile of ice still stands between Cryoegg and the truth about glacial plumbing — and the future of our oceans. Because nobody knows what's going on at the bottom of glaciers, modelers are left to make assumptions based on what limited data exist, Prior-Jones says. “Having lots of new data will improve those models and improve forecasts of sea-level rise. That's the idea.”