These 4 Ancient Apocalypses Changed the Course of Civilization 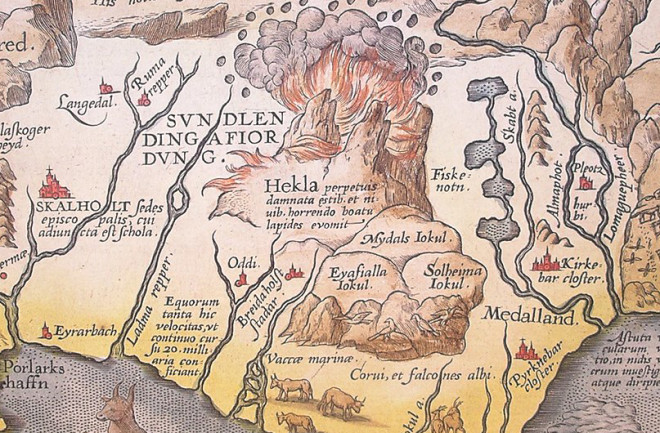 The eruption of the Icelandic volcano Hekla may have led to the collapse of multiple thriving Bronze Age societies. (Credit: Abraham Ortelius/Wikimedia Commons)

Life, as they say, goes on. Until one day it doesn’t. For ancient societies, without the means to predict natural disasters, destruction could often come suddenly and completely by surprise. Below are four of the most devastating natural events in recorded human history, and the societies that they wiped off the map.

Until about 8,000 years ago, the British Isles were a peninsula, joined to mainland Europe by a strip of chalk downs, swamps, lakes and wooded hills. Today, we call this submerged world Doggerland.

Today, fishermen routinely bring up carved bone and antler tools from the Mesolithic hunter-gatherers who lived here. But by the end of the 7th millennium BC, a warming world caused sea levels to rise. The people of Doggerland must have watched with dread as their villages were swallowed up one by one. But one event would turn the slow advance of the sea into an apocalyptic terror.

The edge of the Norwegian continental shelf is an underwater cliff that runs for six hundred miles along the Atlantic Basin. And one autumn day around 6225–6170 BCE, this cliff collapsed. An estimated 770 cubic miles, or over 50 Mount Everests, of rock broke off and slid into the deep ocean. The rubble flow reached a speed of 90 mph underwater.

A map showing the extent of Doggerland, along with the location of the Storegga slides. (Credit: Francis Lima/Wikimedia)

Meanwhile, on the surface, the ocean bent into a tsunami of unimaginable force. The waves may have reached initial heights of 260 feet, striking the Norwegian coast with 130 foot breakers, and Scotland with waves 65 feet high.

As for the people who lived in the low-lying fens of Doggerland, scientists believe this tsunami would have been catastrophic. A 16 foot wall of water buried settlements and farms beneath the waves. And there they would wait 8,000 years for the nets of fishermen to dredge up their remains.

During the mid-second millennium BC, one power dominated the Mediterranean. From their capital on Crete, the Minoans’ influence reached Cyprus, across the Greek islands and into modern Turkey and the Palestinian coast. They left behind remarkable paintings and pioneered technological advancements like indoor plumbing. They grew and flourished. That is, until one summer day around the year 1,600 BC.

The volcano of Thera, on what is now the Greek island of Santorini, erupted with the force of two million Hiroshima bombs. The destruction would have been virtually instant, eradicating all life on the island. Today, you can stand on top of cliffs 1,000 feet high that form the bowl of the Santorini crater, and imagine the vast tsunamis that rippled across the sea, the sky blackening overhead. Minoan settlements on nearby Crete were swept away.

The event devastated the maritime trade that was their lifeblood, and the Minoan empire all but collapsed overnight. In the centuries that followed, they would disappear entirely, even down to their name (the word “Minoan” is a Victorian invention). The eruption sent 24 cubic miles of rock into the atmosphere, four times more than the 1883 Krakatoa eruption. It blocked out the sun and threw the world into a period of bitter cold. Famines spread in Egypt as crops failed, and evidence of the eruption can even be found in the earliest Chinese written chronicles.

“At the time of King Chieh the sun was dimmed,” the records say. “Three suns appeared… Winter and summer came irregularly … Frosts in July.”

Santorini island, Greece, showing the caldera that is 12 km across at its widest point. (Credit: EOS/NASA)

Between the 6th and 2nd centuries BC, the Egyptian city of Thonis (known to the Greeks as Heraklion) was one of the busiest ports of the ancient world. Located on the shores of the Mediterranean, Thonis was the port through which olive oil, wine and copper flowed to the rich lands of the south, and gold, incense and papyrus spread north to the rest of the Mediterranean. It was the Venice of Egypt, a series of islands and sandbanks joined by bridges, pontoons and a grand canal connecting its two ports. Its towering buildings must have looked like they would last forever. But a rare phenomenon known as soil liquefaction would soon spell its doom.

The heavy buildings of Thonis were built on soft coastal ground made of clay. Loose, sandy soil of this kind, when saturated with water and struck by earthquake tremors, can undergo a sudden change that makes it behave like liquid. This is still a challenge to modern architects in earthquake-prone areas like Taiwan.

As earthquakes rocked the Mediterranean in the final centuries of the first millennium BC Thonis began to sink into the sea. Commerce stopped flowing into the city, and at the end of the 2nd Century BC, its grand temple to Amun collapsed. It seems the Egyptians tried to save their city: ancient shipwrecks discovered in the bay seem to have been scuppered intentionally as a measure against subsidence. By the 8th century AD, Thonis was completely swallowed by the waves, and only its name lived on.

The Eastern Mediterranean at the end of the second millennium BC was thriving. Languages and cultures mingled here as trade routes criss-crossed land and sea, from Egypt and Greece to Turkey and the shores of Palestine. Markets bustled in the great thriving cities of Ugarit, Hattusha, Mycenae and Babylon, and the region saw a golden age of literacy and culture. But by 1,100 BC,  virtually every society in this part of the world would collapse, into ash and ruin. And the cause of all this destruction may have been over 2500 miles away, on the snowy slopes of Iceland.

Hekla, the Icelandic volcano that some blame for the collapse of numerous civilizations at the end of the Bronze Age. (Credit: Hansueli Krapf/Wikimedia Commons)

Hekla is one of the world’s most active volcanos. It was thought to be the gate to hell, and the prison where the traitor Judas was tormented. And its most cataclysmic eruption in human history took place sometime around the year 1,100 BC, an event known as Hekla 3. It threw nearly two cubic milesof volcanic rock into the atmosphere, and kicked off a period of cooling that would last for years.

The rapid climate change that descended over northern Europe seems to have driven a vast number of refugees southward, placing unsustainable stresses on the region. The climate unrest caused several groups known as “The Sea Peoples” to begin raiding in the south, causing destruction and sacking cities. Under famine, rebellions and outside attacks, the interdependent societies of the Bronze Age collapsed like dominos, and a period known as “The Late Bronze Age Collapse” cast this whole region of the world into chaos.

Paul Cooper is also the host of the Fall of Civilizations podcast, streaming now.