There's More Magma Under Yellowstone Than We Thought 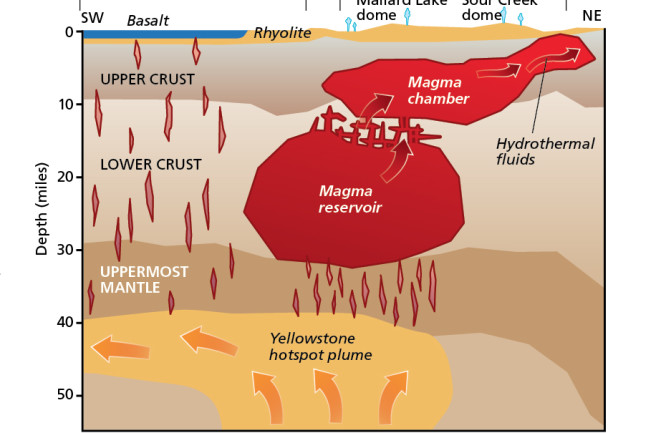 Sign up for our email newsletter for the latest science news
Visually stunning and very steamy, Yellowstone’s Grand Prismatic Spring is one of many hydrothermal features the park owes to the massive supervolcano beneath it. | “Windows into the Earth,” Robert B. Smith and Lee J. Siegel

Whoa. There’s a lot more magma under Yellowstone National Park than we thought. How much? Enough to fill the 1,000-cubic-mile Grand Canyon 11 times over.

University of Utah researchers recently combined data from seismographs near and far to visualize Yellowstone’s magma more precisely. In the past, seismology stations in Wyoming and adjacent states have provided information on a shallow chamber of magma beneath Yellowstone. But by incorporating data from more distant stations as well, seismologists could take a deeper look at the volcano, and they found a much larger body of magma beneath the known chamber.

According to the findings published in Science in April, cross sections of the newly discovered magma body reveal it’s more than four times larger than the one on top of it, making Yellowstone one of the largest volcanic sites on the planet.

The new find doesn’t make the supervolcano any more dangerous, however. The reservoir has been there for millennia and is not getting bigger — the only thing that has changed is our awareness of it. And although there have been major eruptions at Yellowstone, most recently 640,000 years ago, Utah geophysicist Robert Smith puts the odds for a major eruption at 1 in 700,000 during any given year.

[This article originally appeared in print as "Supervolcano Supersized."]