There's a New Record for the Deepest Underwater Cave 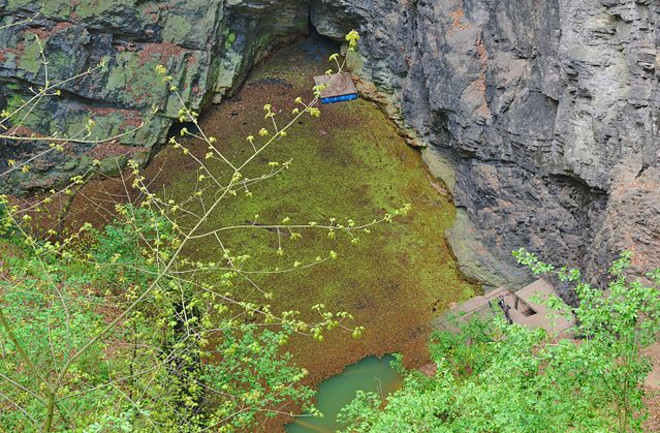 A view of Hranická Propast from above. The cave extends a quarter of a mile beneath the Earth. (Credit: Jiří Komárek/Wikimedia Commons) A cave in the Czech Republic has just been crowned the world's deepest underwater cave. On Sept. 27, a Remotely Operated Underwater Vehicle (ROV) reached the bottom of Hranická Propast, at a depth of 1,325 feet. The team piloting the ROV was led by Polish diver Krzysztof Starnawski, who has been exploring the cave and attempting to hit rock bottom since 1999.

This year's expedition follows dives in 2014 and 2015 that failed to find the bottom, although they did come close. Starnawski got the furthest in 2014 when he sank a probe to 1,260 feet before reaching the end of the line. He was unable to go any further that year himself because the passage was too narrow. Upon his return the next year, he found that an underwater collapse had cleared his way, and he was able to dive to a depth of 869 feet to release another probe, although it bottomed out even shallower than his last attempt. It wasn't until this year, when he returned with a custom-built ROV from Polish diving company GRALmarine, that he finally reached the bottom.

A team of explorers in the Czech Republic has just discovered the world’s deepest underwater cave https://t.co/MRUYRc03FG

His exploration required multiple dives to set up and guide the ROV as well as the use of a decompression chamber sunk beneath the surface to allow him enough time to readjust to surface pressures. Dives below a depth of about 130 feet require stops along the way to the surface to allow dissolved nitrogen in the bloodstream to filter out. At more than six times that depth, Starnawski had to give himself plenty of time to readjust.

He thinks that the cave was formed by carbon dioxide-laden water bubbling up from below and gradually wearing away at a natural fault in the limestone. This indicated to him that the cave was much deeper than it initially appeared, he said, speaking to National Geographic

. Starnawski thinks that the cave's passages likely looked different in the past, hinting that the structure may be more dynamic than it appears. The ROV revealed trees and logs at the bottom of the cave, something that he says should be impossible given the cave's current configuration. The recent rockfall that allowed him to access deeper portions of the cave backs that theory up. Hranická Propast took the record from an Italian cave called Pozzo del Merro, previously assumed to be the world's deepest. That cave was measured to be 1,286 feet deep, just 39 feet short of the record. While Hranická Propast may hold the record for now, new caves are being explored all of the time. Indeed, the Italian cave may prove to be even deeper — the expeditions in Pozzo del Merro discovered a horizontal chamber at the presumed bottom, out of reach of their ROV's cable, which could lead to new discoveries. In other words, this record may not stand for long.