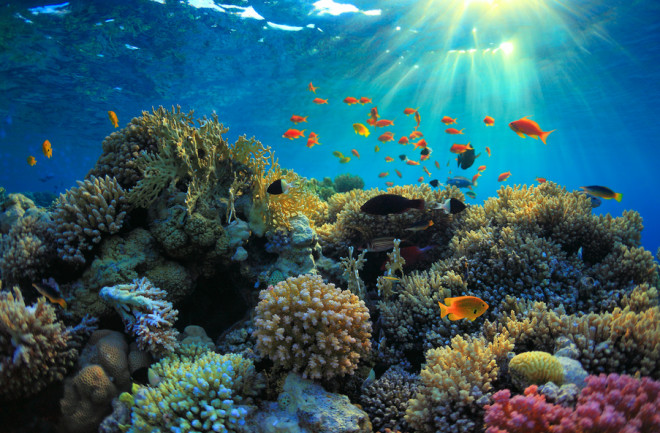 Commonly referred to as the “canaries in the coal mine” for global warming, sea coral survive in a narrow range of conditions. And changes in environmental conditions can do irreparable harm to corals.

The two major threats to corals are increasing water temperatures and increased acidification. While overfishing and pollution also cause trouble, climate change is an immediate existential threat to corals.

Climate change also impacts entire ecosystems that depend on corals. They are home to thousands of species and are critical for humans, too. Southeast Asia’s Coral Triangle, for example, is Earth’s most biologically diverse marine ecosystem. The Great Barrier Reef is home to more than 400 coral species, 1,500 species of fish, 4,000 mollusk species, as well as six of the world’s seven species of sea turtle. And corals protect coastlines from flooding, tsunamis and erosion, while many countries’ economies depend on them, too.

Like the silence of the canary in a coal mine, the death of sea corals is a heartrending metaphor. When the canary stops singing or the corals die, something good and innocent has been forever lost. If we don’t want to lose more life, we must act now. And if we do, there may be hope.

A study looked at three common coral species to see how they would fare under the warming and acidification conditions expected later this century. Funded in part by the National Science Foundation, Ohio State University researchers, and led by Rowan McLachlan, researchers estimated what conditions would be like if the world hits the targets set by the Paris Climate Agreement.

Corals are extremely vulnerable to global warming, according to previous research. But McLachlan and her colleagues found a unique way to study the effect of future conditions for corals.

For one thing, the study lasted 22-months, longer than previous studies. It also exposed corals to an environment that we may expect in the future: chronic, long-term exposure to increased temperature and acidification. Rather than just placing corals in a glass tank in a lab, and adjusting the temperature and pH of the water, the researchers created a realistic environment, including sand, rubble, algae, fish and invertebrates.

Researchers conducted the experiment outside, with natural seawater from the reef that circulated through the tanks. They also mimicked natural daylight and temperature fluctuations.

“The degree to which these mimic natural conditions I think approaches reefs more than any other previous study,” says Andréa Grottoli, the study’s senior author.

The results shocked the researchers a bit. None of the species completely died off during the study — though up to half of some species did die — and some thrived at the end.

This research offers a glimmer of hope — something rare in the world of climate-change science. “We don’t often hear of hope in our field,” says McLachlan, now at Oregon State University. “But the results of our study were really promising.”

Grottoli points out that even though the results were better than predicted, it was still a 50 percent loss. And of those corals that did survive, a third did not do well. In addition, this scenario didn’t include the effects of other stressors to the ecosystem, such as overfishing and pollution.

But for now, the researchers say, the takeaway message is something like this: If we stay within the targets of the Paris agreement, half of corals have a chance of at least surviving. Unfortunately, we’re already on track to miss those targets. Rather than reassuring, the study should be motivating. There’s still hope, but only if we take the threat seriously.