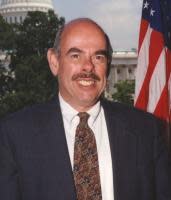 As many of you know already, this week Rep. Henry Waxman's House Oversight Committee came out with a major report on the Bush administration's interference with climate science. Not exactly a new subject, but the Waxman report (PDF) is definitive in the way journalistic accounts often cannot be, simply because congressional investigators have many more tools at their disposal. I wrote my latest DeSmogBlog item about the new Waxman report. "The end of an era," I called it--by which I mean, the end of the Bush vs. science era. And what an era it has been. I end the piece this way:

All in all, as someone who has been over this same trail of evidence multiple times since the year 2003, reading the Waxman report doesn't fundamentally tell me anything that I didn't know before. However, the report does make what I already knew seem more certain and indisputable than ever before. This administration not only fiddled, but lied, while the planet burned. Now it has all been documented about as well and as extensively as anyone could ever demand. It's our job never to forget it.

You can read the entire DeSmogBlog item here.