If you feel immobilized by the latest bump in gas prices, just follow these five simple steps: 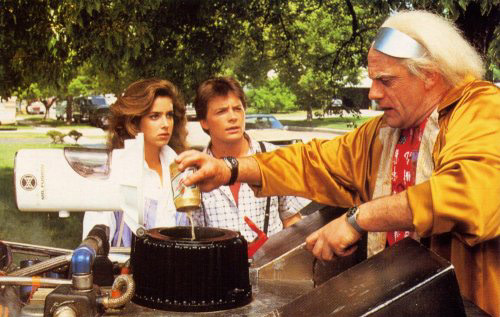 These steps outline the process of creating biogas—a type of biofuel—using otherwise unwanted, formerly living things. MSNBC has a nice list of some innovative biogas processes, converting products like rotting jellyfish, rancid milk, leftovers from fancy restaurants, and sugary confectionery waste from Cadbury Creme Eggs. We can get energy from garbage, just like Doc Brown's Mr. Fusion device in Back to the Future. The basic idea is to combine these waste products with garbage-loving microbes, which will digest the plant- or animal-derived substances in the absence of oxygen and produce biogas (methane, carbon dioxide, and hydrogen). When these gases are combusted (chemically combined with oxygen), energy is released, capable of generating electricity and heat, being compressed into power fuel cells, or concenterated into a form of natural gas. Of course, methane and carbon dioxide don't exactly have a clean record with environmentalists, but according to the article, "scientists consider the carbon dioxide release 'carbon-neutral' because its escape into the atmosphere is balanced by what had been taken in during photosynthesis" by the crops while they were growing. Further, "when burned [methane] releases significantly less carbon dioxide... than other fossil fuels such as coal and oil." These developments arrive at an opportune time. Biofuel used to be one of our nation's most promising alternative fuel sources, sure to make us less dependent on foreign sources of oil, but recent news has revealed some major drawbacks lurking behind the hoopla. First, a Nobel Prize winner found that the gases released by corn contributed more to global warming than the fossil fuels it replaced. And last month, two articles in Science reported that clearing land for biofuel production produces twice as much greenhouse gas than estimated. And then there's the hunger thing. Sure, in America—where people are obese, carb-laden, and nervous about our supply of oil—converting 1/3 of the corn harvest to biofuel seems like a good move. But what about the rest of the world? For those unlucky "others," the now-global competition between food and fuel has caused price jumps and food shortages, if not famines. So if we don't want the gooey nougat that didn't make it into the Cadbury Creme Egg (a rather scary thought), chances are no one else does either—so why not let the bacteria romp around and use their gases for the greater good?