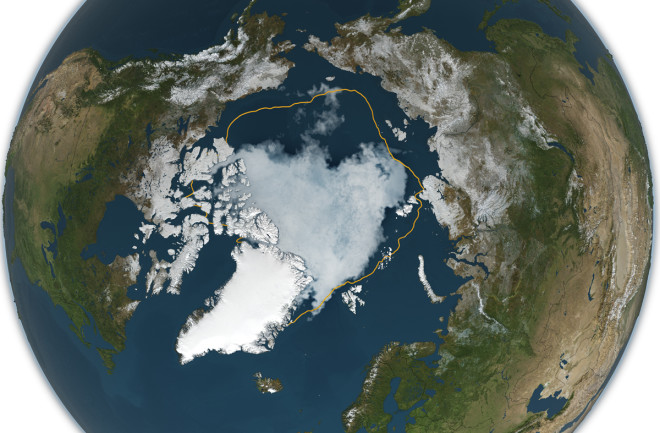 A composite image shows how the extent of Arctic sea ice in September 2016 compared with a 30-year average for the month (yellow line). | NASA's Scientific Visualization Studio

One of the mightiest El Niño patterns in memory brought unprecedented drought and flooding in 2016, the hottest year on record. The planet also passed a grim milestone: an atmospheric carbon dioxide concentration of 400 parts per million, including remote Antarctica, which hasn’t seen that much CO2 for 4 million years. Climatologists target 350 ppm as the uppermost threshold before we see dire consequences, like catastrophic sea level rise. Some locations previously had topped 400 ppm on a seasonal cycle, but scientists say this time it’s permanent — and global.

Climate Change Around the World

Slush Dogs For the first time in the Iditarod’s 44-year history, organizers imported snow for the sled dog race via the Alaska Railroad, as winter and spring temperatures climbed 9 degrees F above average, shattering a decades-old record.

Western Drought . . . Still Hopes that El Niño would fill reservoirs crumbled when predicted precipitation didn’t reach the West. By summer, the Sierra Nevada snowpack — L.A.’s lifeblood — was half of normal. New models show it won’t recover until 2019, even with a few winters of heavy snow.

Climate Cruise Arctic sea ice vanished from the Northwest Passage this summer, letting the cruise ship Crystal Serenity take about 1,000 tourists from Alaska to New York for the first time.

Paris Accord On April 22, Earth Day, 175 nations agreed to keep global warming below 2 degrees C. But scientists say the non-binding Paris pact likely can’t hit its goal. And a study in March found that even a 1.5 degree C increase will severely degrade coral reefs and hurt crop productivity in the tropics.

Epic Heat Summer temperatures brought record heat to the Middle East. A site in Kuwait hit 129.2 degrees F in July; the World Meteorological Organization is investigating if that was the hottest temperature ever recorded in the Eastern Hemisphere.

Spiraling out Climatologist Ed Hawkins has a new way to look at rising temps. By laying out months like a clock, his plot shows the spiral toward a 2 degree C heat increase since 1880.

Coal Collapse Coal use has peaked in China, the world’s largest polluter, and is falling off earlier than expected, according to a Nature Geoscience analysis. That’s welcome news as another fresh study showed coal pollution prematurely killed 366,000 Chinese in 2013.

Zombie Spores Scientists blamed an anthrax outbreak among Siberian reindeer on an animal that died from the disease decades ago. Record heat melted permafrost and exposed the infected carcass, killing a child and sickening others.