The monster in moonlight: striking satellite image shows Irma churning north in the dead of night 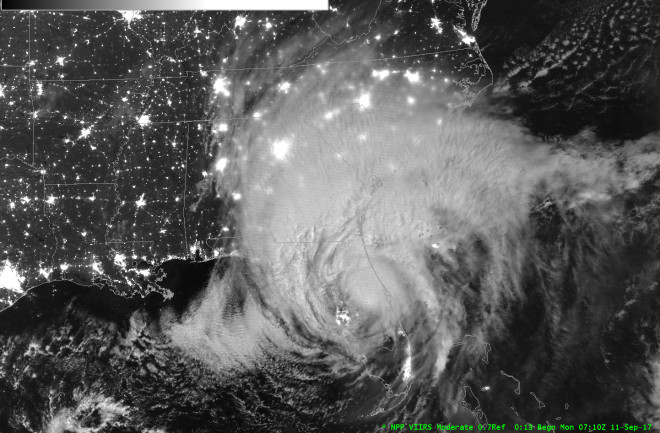 The Suomi NPP satellite captured this photo of Hurricane Irma over Florida at 3:10 a.m. EDT on Sept. 11, 2017. (Click to enlarge. Source: Cooperative Institute for Meteorological Satellite Studies) As Hurricane Irma continued to churn north over Florida early in the morning of Sept. 11, the Suomi NPP spacecraft passed overhead and sent back this dramatic image. In the image, acquired by a nighttime sensor called the "Day/Night Band" on the satellite's VIIRS instrument, the hurricane is illuminated by the relatively faint light of the moon. But the image reveals more than that. "In addition to the cloud structures, this band can help identify power outages," writes Scott Lindstrom in the satellite blog of the Cooperative Institute for Meteorological Satellite Studies. "Tampa and Miami city lights are still visible. Key West is dark."

Part of the Florida Keys at 3:10 a.m. on Sept. 11, 2017. (Source: CIMSS Satellite Blog) This is a zoomed-in view of the same image. It stretches from Key West toward the lower left to Marathon Key in the upper right corner. Irma's ferocious winds had knocked out power to most of The Keys. And in this image, there is indeed little to no illumination coming from lights on the ground. The VIIRS Day/Night Band is designed to capture very low emissions of light. In addition to city lights, it can spot a wide variety of features, including lightning, lava flows, navigation lights from fishing boats, flares from gas drilling operations, and the aurora borealis. And when the moon is up, lunar light can be seen reflecting off ice, snow, and clouds.