The Loudest Sound Ever Heard 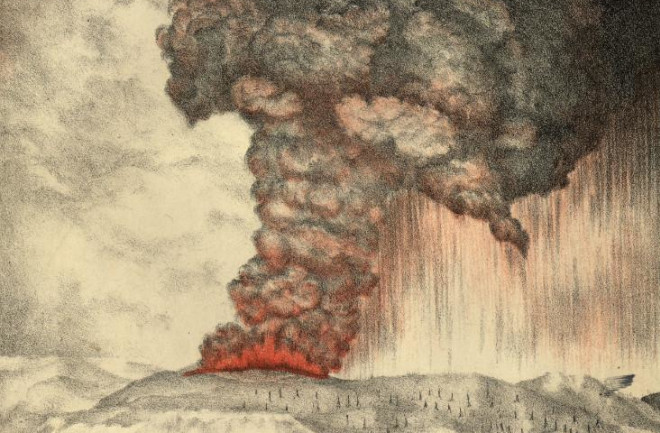 A lithograph of the massive 1883 eruption of Krakatoa. (Credit: Parker & Coward 1888/Wikipedia)

It was 10:02 AM local time when the sound emerged from the island of Krakatoa, which sits between Java and Sumatra in Indonesia. It was heard 1,300 miles away in the Andaman and Nicobar islands (“extraordinary sounds were heard, as of guns firing”); 2,000 miles away in New Guinea and Western Australia (“a series of loud reports, resembling those of artillery in a north-westerly direction”); and even 3,000 miles away in the Indian Ocean island of Rodrigues, near Mauritius (“coming from the eastward, like the distant roar of heavy guns.”) In all, it was heard by people in over 50 different geographical locations, together spanning an area covering a thirteenth of the globe.

Think, for a moment, just how crazy this is. If you’re in Boston and someone tells you that they heard a sound coming from New York City, you’re probably going to give them a funny look. But Boston is a mere 200 miles from New York. What we’re talking about here is like being in Boston and clearly hearing a noise coming from Dublin, Ireland. Travelling at the speed of sound (766 miles or 1,233 kilometers per hour), it takes a noise about 4 hours to cover that distance. This is the most distant sound that has ever been heard in recorded history.

So what could possibly create such an earth-shatteringly loud bang? A volcano on Krakatoa had just erupted with a force so great that it tore the island apart, emitting a plume of smoke that reached 17 miles into the atmosphere, according to a geologist who witnessed it. You could use this observation to calculate that stuff spewed out of the volcano at over 1,600 miles per hour — or nearly half a mile per second. That’s more than twice the speed of sound.

This explosion created a deadly tsunami with waves over a hundred feet (30 meters) in height. One hundred sixty-five coastal villages and settlements were swept away and entirely destroyed. In all, the Dutch (the colonial rulers of Indonesia at the time) estimated the death toll at 36,417, while other estimates exceed 120,000.

The British ship Norham Castle was 40 miles from Krakatoa at the time of the explosion. The ship’s captain wrote in his log, “So violent are the explosions that the ear-drums of over half my crew have been shattered. My last thoughts are with my dear wife. I am convinced that the Day of Judgement has come.”

A map showing the area in which the Krakatoa explosion could be heard. (Credit: “The eruption of Krakatoa, and subsequent phenomena,” 1888)

In general, sounds are caused not by the end of the world but by fluctuations in air pressure. A barometer at the Batavia gasworks (100 miles away from Krakatoa) registered the ensuing spike in pressure at over 2.5 inches of mercury. That converts to over 172 decibels of sound pressure, an unimaginably loud noise. To put that in context, if you were operating a jackhammer you’d be subject to about 100 decibels. The human threshold for pain is near 130 decibels, and if you had the misfortune of standing next to a jet engine, you’d experience a 150 decibel sound. (A 10 decibel increase is perceived by people as sounding roughly twice as loud.) The Krakatoa explosion registered 172 decibels at 100 miles from the source. This is so astonishingly loud, that it’s inching up against the limits of what we mean by “sound.”

When you hum a note or speak a word, you’re wiggling air molecules back and forth dozens or hundreds of times per second, causing the air pressure to be low in some places and high in other places. The louder the sound, the more intense these wiggles, and the larger the fluctuations in air pressure. But there’s a limit to how loud a sound can get. At some point, the fluctuations in air pressure are so large that the low pressure regions hit zero pressure — a vacuum — and you can’t get any lower than that. This limit happens to be about 194 decibels for a sound in Earth’s atmosphere. Any louder, and the sound is no longer just passing through the air, it’s actually pushing the air along with it, creating a pressurized burst of moving air known as a shock wave.

Closer to Krakatoa, the sound was well over this limit, producing a blast of high pressure air so powerful that it ruptured the eardrums of sailors 40 miles away. As this sound travelled thousands of miles, reaching Australia and the Indian Ocean, the wiggles in pressure started to die down, sounding more like a distant gunshot. Over 3,000 miles into its journey, the wave of pressure grew too quiet for human ears to hear, but it continued to sweep onward, reverberating for days across the globe. The atmosphere was ringing like a bell, imperceptible to us but detectable by our instruments.

By 1883, weather stations in scores of cities across the world were using barometers to track changes in atmospheric pressure. Six hours and 47 minutes after the Krakatoa explosion, a spike of air pressure was detected in Calcutta. By 8 hours, the pulse reached Mauritius in the west and Melbourne and Sydney in the east. By 12 hours, St. Petersburg noticed the pulse, followed by Vienna, Rome, Paris, Berlin, and Munich. By 18 hours the pulse had reached New York, Washington DC, and Toronto.  Amazingly, for as many as 5 days after the explosion, weather stations in 50 cities around the globe observed this unprecedented spike in pressure re-occuring like clockwork, approximately every 34 hours. That is roughly how long it takes sound to travel around the entire planet.

In all, the pressure waves from Krakatoa circled the globe three to four times in each direction. (Each city felt up to seven pressure spikes because they experienced shock waves travelling in opposite directions from the volcano.) Meanwhile, tidal stations as far away as India, England, and San Francisco measured a rise in ocean waves simultaneous with this air pulse, an effect that had never been seen before. It was a sound that could no longer be heard but that continued moving around the world, a phenomenon that people nicknamed “the great air-wave.”

Recently, an incredible home video of a volcanic eruption taken by a couple on vacation in Papua New Guinea started making the rounds on the Internet. If you watch closely, this video gives you a sense for the pressure wave created by a volcano.

When the volcano erupts, it produces a sudden spike in air pressure; you can actually watch as it moves through the air, condensing water vapor into clouds as it travels. The people taking the video are (fortunately) far enough away that pressure wave takes a while to reach them. When it does finally hit the boat, some 13 seconds after the explosion, you hear what sounds like a huge gunshot accompanied by a sudden blast of air. Multiplying 13 seconds by the speed of sound tells us that the boat was about 4.4 kilometers, or 2.7 miles, away from the volcano. This is somewhat akin to what happened at Krakatoa, except the ‘gunshot’ in that case could be heard not just three but three thousand miles, away, a mind-boggling demonstration of the immense destructive power that nature can unleash.