We’re unlikely to see an iceless planet any time soon. But even modest decreases in ice have big consequences. 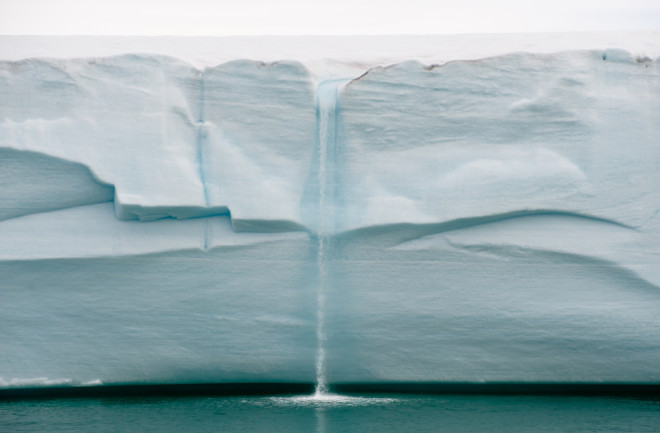 The statistics are grim. Collectively, the Antarctic and Greenland ice sheets lose around 427 billion metric tons of ice a year on average. That’s more than 1.1 billion tons every day. The water from those liquefying ice sheets pours into the oceans, inching sea levels higher and higher.

There’s little sign that the melting of the ice caps will slow any time soon. If anything, it’s going to get exponentially faster, scientists say. Like the glaciers themselves, it’s a process that begins slowly but carries with it a terrifying momentum.

The ice caps store 99 percent of all the freshwater on Earth. It is a staggering amount of water, and the significance is readily apparent if you’ve ever stood on the shore of one of North America’s Great Lakes and gazed outward to the watery horizon. All that water, enough that it appears to be an inland sea, is but a fraction of what’s carried within the solid bulk of Antarctica.

Together, the ice in Antarctica and Greenland would raise Earth’s sea levels by around 230 feet if it all melted. The seas would eat up an appreciable portion of the planet’s current land, drowning coastal cities like New York, Los Angeles and Houston. Low-lying Florida would simply disappear. And Antarctica, once a snowy wasteland, would become a rocky archipelago, free of the overlying ice and partially submerged by rising seas.

But an Earth completely free of ice isn’t going to happen within our lifetimes, or likely even within the next few thousand years. Most projections put sea-level rise at around a foot by 2100 — far less than what’s possible. By the next century, Earth’s ice sheets will still be firmly in place, if diminished.

The last thing we should take away from that fact is a sense of complacency, however. Even small changes in sea levels carry dire consequences. That single foot of sea-level rise could devastate low-lying coastal cities and force massive migrations inland. And melting glaciers have the potential to alter ocean currents, which could change global weather patterns in unpredictable ways.

The ice caps that adorn Earth’s North and South poles are so ingrained into our mental geography that their presence is often no more than an afterthought. Even grade-schoolers know to splash some white on the top and bottom of a drawing of the Earth. But turn back the clock some 40 million years, and those icy promontories disappear. Indeed, for the majority of Earth’s existence, the poles have been ice-free.

In the times before our current Ice Age (which simply references the fact that permanent ice exists on the surface), dinosaurs roamed Antarctica and alligators swam in Alaska. Even in more recent times, the planet has been significantly warmer and wetter than it is now.

During the mid-Pliocene, around 3 million years ago, temperatures were 5 to 9 degrees Fahrenheit warmer than they are now, and the seas were as much as 50 feet, to more than 75 feet, higher.

It’s not unusual for the ice sheets to be smaller and sea levels to be significantly higher than they are now. But, as with global temperatures, rapid changes to our natural world carry dire consequences for the ecosystems and organisms that depend on it.

The majority of the rise in sea levels today comes from two things: melting ice and expanding water. As water warms it becomes less dense, and some estimates suggest that as much as half of sea-level rise this decade has been due to warmer ocean water taking up more space. But with melt rates only projected to increase, vanishing ice sheets will become the more important factor in sea-level rise in the future.

The meltwater that’s causing the oceans to rise comes from the Greenland and Antarctic ice sheets. While the Arctic ice cap is shrinking too, it doesn’t contribute to sea-level rise because that ice is already floating in the ocean — it’s taking up all the space it can.

Estimates of how much Greenland and Antarctica’s melting ice contributes to sea-level rise vary, though scientists have been consistently improving their models. One study estimates that, since the satellite record began in the 1990s, the two ice sheets have contributed a total of 17.8 millimeters to sea-level rise. Another recent paper says that Antarctica alone has contributed 0.36 millimeters per year to sea level increases, and a total of 14 millimeters since 1979. During that period, the ice sheet lost mass at increasing rates — from 44 billion tons per year between 1979 and 1990 to as much as 277 billion tons a year by 2017.

Read more: How Hot Will Climate Change Make the Earth By the Year 2100?

Though sea-level rise is measured in millimeters right now, that could soon change. Most studies point out that ice loss and sea-level rise will keep increasing in magnitude as time goes on. One study finds a noticeable inflection point in 2030, where under the worst-case scenario, the ice sheets begin adding tens of millimeters to sea levels every decade, ending up with over a foot of sea-level rise. That’s roughly as much sea-level rise per decade as we’ve seen in the past 30 years.

One reason for this could be that ice sheets are flowing into the ocean at ever-quickening rates. As warmer ocean water eats away at their base, the massive glaciers that sprawl from mountains in Antarctica and Greenland and extend far out into the ocean have less holding them back.

The result is ice that falls into the ocean, where it can melt ever faster. One glacier in Greenland, for example, doubled its speed recently within just five years. In Antarctica, there are multiple ice sheets scientists say are at high risk of collapsing entirely, including Thwaites Glacier, sometimes referred to as the “Doomsday Glacier.” Should it collapse and melt, it could raise sea levels by as much as 3 feet.

Once begun, it’s likely difficult to halt the process of ice sheet disintegration. That means even getting our emissions under control and putting a halt to global warming might not stop the ice sheets from melting.

And, though some evidence has indicated Antarctica might be gaining more ice than it’s losing as wetter conditions increase snowfall, more recent studies say that’s not true. Though some parts of the continent have been seeing more precipitation, Antarctica has lost ice, on average, since we began keeping tabs on it.

So, while the ice caps aren’t going to disappear, that’s largely beside the point. There’s so much water locked in ice on Earth that releasing even a small portion of it can cause big changes. We need only look back in time to see what we might be in for. During the last interglacial period, a bit over 100,000 years ago, global temperatures were around 3 degrees hotter than today. That’s about as warm as the planet is projected to be in 2100, if we’re lucky. Despite that relatively small change in temperature, sea levels may have been 10 feet higher than they are today. Is it a glimpse of our future? Only time will tell.