Thwaites Glacier in western Antarctica is in serious danger. It's swiftly melting, and a collapse could cause a dramatic increase in sea level rise. 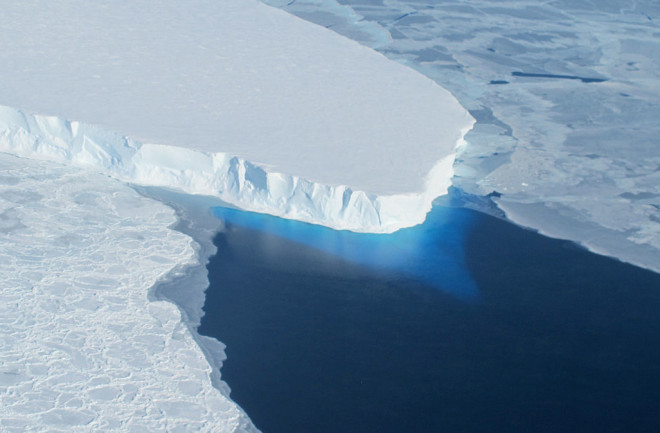 Glaciers everywhere might be melting, but only one has earned the most terrifying nickname: the Doomsday Glacier.

Officially called the Thwaites Glacier, this mass of ice nestled into the western edge of Antarctica is melting at an alarming rate. A look at maps of the region's ice loss makes this clear, says Nick Holschuh, a geologist at Amherst College. “If you were to zoom out and look at the whole picture, there's just this bright red spot to the edge of the West Antarctic Ice Sheet where Thwaites and [neighboring glacier] Pine Island are thinning like crazy.”

The rate at which Thwaites is slipping away and contributing to sea level rise is only half the reason researchers are concerned about its loss. Behind the glacier lies an even larger body of ice that, for as long as Thwaites is intact, is protected from contact with too-warm waters. If Thwaites melts away, that much-larger ice block will add water to our oceans as well, further driving up sea level rise. If and when this might happen, however, is what researchers are trying to learn. “We do know that Thwaites Glacier is quite important,” says Atsuhiro Muto, a polar geophysicist at Temple University. “But still, how much and how fast that is going to increase into the decades and centuries is still uncertain.”

Sending in the Scientists

Getting answers to these critical questions about Thwaites is driving a multiyear, international research expedition. Called the International Thwaites Glacier Collaboration, the mission brings scientists (including Holschuh and Muto) down to the glacier to inspect how it’s changing through a barrage of studies. The project is a collaboration between the National Science Foundation and the U.K. Natural Environment Research Council, which independently recognized that Thwaites was a crucial but under-scrutinized glacier when it comes to understanding future sea level rise. The concern over the fate of this particular patch of ice dates to the 1970s, when scientists published some of the first papers explaining how the very shape of Thwaites and the continent it connects to makes for precarious melting conditions.

Like other glaciers, Thwaites has a long, thin tongue of ice that sticks out into seawater. If you were to dive into the water beneath the protruding, visible ice and swim downward, you’d eventually see that Thwaites makes contact with rock. This interface is called the grounding line. Britney Schmidt, a geophysicist at Georgia Tech, has, in a way, dove down to give the junction a close look. As part of the international Thwaites mission, Schmidt and her team navigated a robot submarine down to the grounding line to get a detailed understanding of the ice shape and conditions, as this is where the most important melting action is happening. Human-caused climate change has warmed ocean waters that swirl around the grounding line. The water, which now sits above the freezing temperature of ice, melts the glacier faster than new ice can form. As the ice disappears, the grounding line retreats and less of Thwaites sits on the rock.

So long as Thwaites connects with the earth beneath it, the glacier will block warm waters from creeping up to the broader, thicker ice — the Western Antarctic Ice Sheet — sitting behind it. But if Thwaites melts enough that it lifts off, the ice sheet will be exposed, too. And unlike the currently melting glacier, the ice sheet extends into a pit in the Earth’s crust that gets as deep as 1.5 miles below sea level in some places. When exposed ice sits lower than the water, there’s no stopping the melt, Schmidt says. “The water will flow in, the ice will thin rapidly, and then the whole thing that's been stable and sitting on a continent for thousands of years will go away.”

How Will It Turn Out?

To be clear, Thwaites melting is concerning on its own. The glacier is big and disappearing faster than others in the region. If completely liquified, Thwaites would raise sea levels by 1.5 to 3 feet. Beach shorelines would be three feet shallower than they are now — and storm surges during severe weather events would reach farther and deeper inland than ever before.

But researchers still don’t know exactly how much of the glacier will melt or when, which makes it difficult to know if the ice sheet sitting beyond Thwaites will wash away, too. “Because it’s uncertain, Thwaites has the potential to really be the Doomsday Glacier. It also has the potential to not be so bad,” Muto says. “But as long as we still have that potential for it to be bad, we need to be doing something about it so that we don’t actually tend towards that worst-case scenario.”

By “do something,” Muto means addressing climate change, the force pushing Thwaites to melt. But we also have to prepare for some of the inevitable sea level rise that is coming our way. To behave accordingly — like put up sea walls or move out of low-lying areas — policymakers need to know how much and how fast the waterline will encroach. “Those kinds of questions are really important because understanding the problem is only one piece of figuring out how we all respond to it," Schmidt says.

It would be nearly impossible to predict how much sea levels will rise down to the exact inch, day, or year. But researchers are keeping close tabs on what's happening to the glacier, which will give them a much better shot at providing specific indications about where the situation is headed. Their ability to learn more than ever before about the glacier puts a slightly positive spin on the Doomsday Glacier. “It has really kind of been an incredible exercise, bringing together an extremely diverse range of scientific expertise,” Holschuh says. “It has really allowed us to look at this system in a totally new way. Which makes me optimistic that we're going to learn a lot.”