Think the ozone hole is on the mend? It's gotten worse. 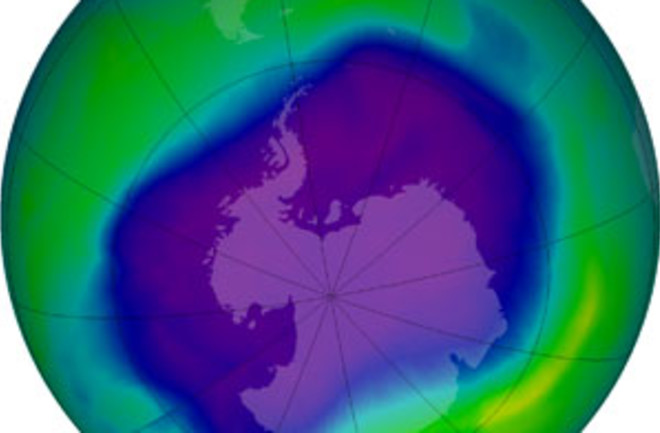 The ozone hole in November 2006 is as big as ever. The thinnest ozone is blue-violet and the thickest ozone is yellow-green.

Hovering 10 miles above the South Pole is a sprawling patch of stratosphere with disturbingly low levels of radiation-absorbing ozone. The size of the hole (pictured in dark blue) wanes and waxes due to seasonal changes in temperature and shifting levels of ozone-depleting pollutants. In early October 2006, the Antarctic stratosphere was the coldest it has been since 1979, and the ozone hole loomed bigger than ever, spanning an area larger than North America. What's going on? Wasn't the 1987 United Nations Montreal Protocol—an international agreement that set limits on the emission of ozone-eating compounds like chlorofluorocarbons, or CFCs—supposed to shrink Earth's life-threatening atmospheric bald spot?

Like the chemistry of global warming, the answer is not simple. Unlike global warming, however, everyone agrees on why ozone depletion is a threat, what causes it, and what to do about it. Without a protective layer of ozone, life would be exposed to DNA-damaging ultraviolet rays from the sun. Unfortunately, the three-oxygen atom of ozone is also highly reactive, and the conditions in the stratospheric clouds over the South Pole render it even more so. When the temperature there dips below –126 degrees Fahrenheit, ozone-destroying chemical reactions begin. Chlorine atoms (liberated by the breakdown of chlorine-containing products) convert ozone into molecular oxygen, which provides far less UV protection. A single chlorine atom can tear apart thousands of ozone molecules.

Climate studies in the 1970s and 1980s provided the first evidence that CFCs—found in items like hair spray, refrigerants, pesticides, plastics, and fire retardants—work their way into the stratosphere and unleash the chlorine atoms that initiate this destructive chain reaction. The Montreal Protocol and subsequent amendments have made a major dent in the problem by banning the use of most CFCs. "I think it's safe to say we're on the threshold of recovery," says Michelle Santee, an atmospheric scientist at NASA's Jet Propulsion Laboratory. But unlike pollutants that break down quickly, such as the sulfur compounds that cause acid rain, atmospheric chlorine can persist for more than 50 years. That helps explain why the ozone layer is still under attack, even though the amount of airborne chlorine is decreasing.

Still, why was this year's hole so huge? One possibility is that 2006 was simply colder than other years. Another possibility is that global warming could be contributing to the cold snap. Greenhouse gases, like carbon dioxide and methane, trap heat down near the surface. The result: colder temperatures in the stratosphere.

Taking a long view, though, the news is good. In the last decade, global ozone levels have stabilized or increased only slightly. All the same, experts estimate that it will take 50 to 70 years for Antarctic ozone levels to get anywhere near pre-1980 levels. And that, of course, depends on continued control of the ozone eaters.