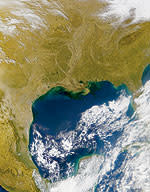 Brownish water from the Mississippi River billows into the Gulf of Mexico in this 2000 image, creating a huge, lifeless area.

The dead zone, a 6,000-square-mile area in the Gulf of Mexico that is almost totally devoid of life, persists despite conservationists’ ongoing efforts to rein it in. First mapped in the mid-1980s, the zone is caused by nitrogen fertilizer runoff, which flows from inland farms down the Mississippi River and into the gulf. Nitrogen causes huge summer algal blooms that decompose and sink to the bottom, where bacteria feast on them and, in the process, suck vital oxygen from the seawater.

Don Scavia, now an environmental scientist at the University of Michigan at Ann Arbor, has annually compiled data on the fluctuating size and exact location of the dead zone since its discovery. Using that information, he constructed a computer model that offers the most accurate method to date of predicting how such zones might affect the Gulf of Mexico in the future. The results indicate that recently proposed measures to reduce farm runoff are probably not sweeping enough to do much good. To stave off a complete collapse of gulf fisheries and shrimp populations, Scavia finds, the dead zone must shrink drastically, to 2,000 square miles or less—and for that to happen, agricultural nitrogen runoff will have to decrease by at least 40 percent. “That is not going to happen with the current program, which only offers voluntary incentives to nitrogen-using farmers,” he says.

A more aggressive approach wouldn’t necessarily require cracking down on farms, Scavia argues: “A better solution might be strategically placed wetlands within the basin that could keep more of the nitrogen on the land so it never reaches the water.” Such wetlands naturally convert the runoff into nitrogen gas that is released into the atmosphere. Protecting the coastal wetlands would not only allow farmers to keep using their fertilizers but could also aid the biodiversity of the region and improve flood control. “I don’t think it’s out of the question,” says Scavia. “Yes, it’s expensive, but so is a collapsed fishery.”