Our biggest sources of energy basically rely on fire—burning fossil fuels. To build a sustainable energy future, we have to start relying on the other three classical elements.

Strip our biggest sources of energy to their most elemental, and you are left with fire—the burning of fossil fuels. To build a sustainable energy future, we will have to start relying a lot more on the other three classical elements: water, wind, and earth. This year, discover teamed up with the American Society of Mechanical Engineers, the Institute of Electrical and Electronics Engineers (ieee, and the National Science Foundation to bring leading energy experts to Capitol Hill, where they briefed Washington insiders and charted the scientific, technological, and political challenges that lie ahead on the road to a new energy economy. 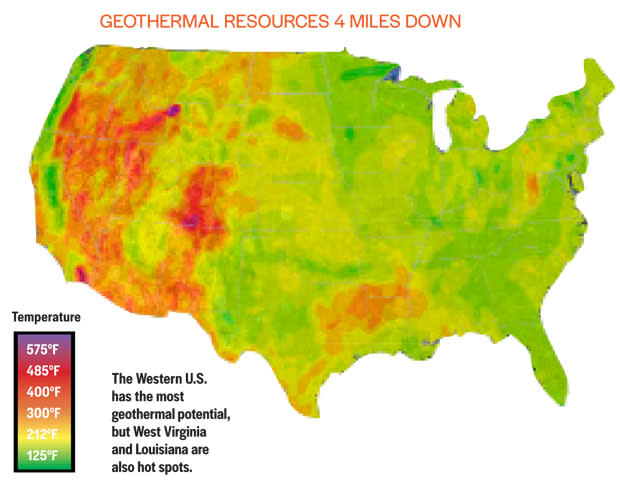 1 EARTH: Tap Into the Heat Beneath Your Feet

THE CHALLENG Geothermal energy has been around so long that it hardly deserves to be called “alternative”; people have been tapping hot water below the Earth’s surface to generate electricity for a century. But geothermal accounts for only about 16 terawatt-hours a year in the United States, less than half of 1 percent of total electricity consumption. As with wind energy, geothermal is simple in principle but hard to do successfully in practice. Too often, drilling results in wells that are hot but have no water or wells that are simply not hot enough. A symptom of the industry’s woes is that federal funding for geothermal energy has fallen from about $450 million in 1979 (in 2011 dollars) to below $50 million this year.

THE NEW ENERGY ECONOMY Geophysicist David Blackwell of Southern Methodist University says that lack of attention is a mistake. He estimates that there are 100 to 500 gigawatts of potential geothermal energy locked beneath the United States. What is needed to successfully exploit all that energy, according to Nevada geologist James Faulds, is investment in more detailed geologic mapping, three-dimensional modeling of underground water flows, and testing of water chemistry that can indicate the temperature of subsurface waters. More surveys of ancient hot springs, which can point to the locations of still-active geothermal systems, would help too.

Such support for geothermal energy is suddenly looking more likely due to an unlikely ally: the natural gas industry, which is in the midst of a giddy boom driven by the widespread adoption of the controversial drilling technique known as fracking. “We’re discovering that many of the gas wells that have already been drilled produce significant amounts of hot water,” says Karl Gawell, executive director of the Geothermal Energy Association. Many of those fracked wells could be reengineered to have a second life as sources of geothermal energy. 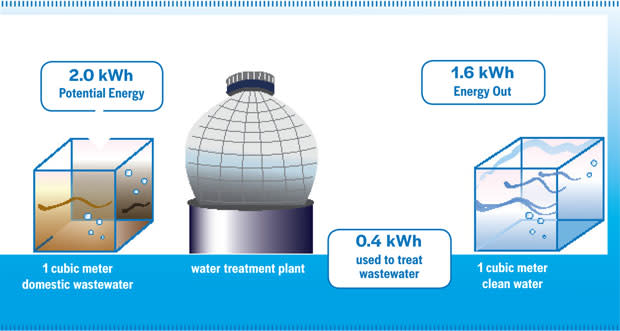 Wastewater Treatment of the Future Today a typical plant consumes 0.7 kilowatt-hours of energy to clean a cubic meter of wastewater. But that same cubic meter contains about 2 kilowatt-hours of potential chemical energy. Next generation plants will not only be more efficient but also will extract energy from the organic material and nitrogen in sewage. | NULL

THE CHALLENGE Every day you are literally flushing energy down the toilet. “You can’t talk about energy as a resource and water as a resource independently,” says Tom Peterson, an engineer at the National Science Foundation. In California alone, 19 percent of all the electricity and 30 percent of the natural gas is used to move, treat, and heat water.

THE NEW ENERGY ECONOMY Since transporting water eats up so much electricity, developing ways to recycle the water that goes down the drain could yield big energy savings. The nation’s model for this kind of innovation is Las Vegas. “We reuse virtually 100 percent of our wastewater,” says Patricia Mulroy, general manager for Las Vegas Valley Water District. Over the past 20 years, the district has modernized its water reclamation system, which now returns 70 billion gallons of treated wastewater annually to Lake Mead, the source of 90 percent of Las Vegas’s water. With the nation’s water infrastructure nearing the end of its design life, Stanford engineer Richard Luthy says now is the time to build a more energy-efficient system. “We need to avoid pumping water over long distances and focus on systems that produce water for reuse where it’s generated,” he says.

And the wasted energy in each flush lies not just in the water—there is also energy in the waste itself. One gallon of typical domestic wastewater contains enough organic compounds and nitrogen to power a 100-watt lightbulb for five minutes. The exciting implication is that next-generation wastewater treatment plants could use new technologies, including microbe-powered fuel cells﻿, to capture enough methane, hydrogen, and other fuels from wastewater to generate all the energy they need, and then some. “We can reclaim high-quality water from wastewater at almost no energy cost,” Luthy says. “It could go from being a liability to an asset.”

THE CHALLENGE Anyone who made a cross-country trip in the last few years will have seen the transformation that turned the United States into the world’s leading producer of wind energy. The wind farms that now punctuate the landscape from California to New York produce a total of almost 100 terawatt-hours of electricity a year, almost 2.5 percent of total demand. But that is still small potatoes compared with the 45 percent generated by coal-fired plants. There are a host of scientific issues to overcome before wind can seriously challenge fossil fuels, but one of them is surprisingly basic: We still do not completely understand the way winds blow. The wind behaves differently 200 to 400 feet up, where the turbines actually operate, than it does near the ground. “We have thousands of monitoring stations around the country measuring the wind up to about 30 feet,” says William Mahoney III, a deputy director at the National Center for Atmospheric Research in Boulder, Colorado. “But very few above that.”

THE NEW ENERGY ECONOMY Because of the lack of data, energy projections at wind farm sites can be highly inaccurate, with errors of up to 20 percent in farms that are built over uneven terrain. A small change in the wind has big implications: A 10-mile-an-hour wind can generate 65 kilowatts, but at 15 miles an hour, the same turbine can produce 300 kilowatts. Complex airflows over hills and mountains create wind shear and turbulence that produce stress on turbines’ blades, gearboxes, and bearings. Since turbines are designed without a complete understanding of such wind flows, they are failing at higher than expected rates. Failure to anticipate sudden gusts is especially problematic, because they can both damage the turbines and lead to sudden transmission line overloads. The situation is similar to the early days of aviation, when aircraft designers were working by trial and error because the atmosphere was so poorly understood.

Being able to predict average wind speed within just a fraction of a mile an hour would make a huge difference. The way to do that, Mahoney says, is to gather the missing data. Government, academia, and industry need to invest in new research on wind flow that will allow us to truly wrap our heads around what’s going on up there—and to reap the full benefits of wind power.

THE CHALLENGE The greatest clean energy sources and efficient technologies are pointless if nobody wants to use them. Sometimes the resistance reflects a problem of engineering (for instance, the short range, high cost, and long charging time of electric cars). Often, though, the problem is one of perception. “Our default is the status quo, and we have a myopic focus on the here and now,” says Elke Weber, a psychological economist at Columbia University who studies why people engage in risky environmental behavior. She argues that understanding consumer behavior needs to be at the heart of a meaningful energy policy.

THE NEW ENERGY ECONOMY Some of the most effective strategies to help consumers overcome aversion to change are very simple. Weber finds that merely offering the energy-efficient option as the default choice can greatly increase its acceptance. She examined the familiar lightbulb decision: Should I buy a compact fluorescent bulb (CFL) or go with the more familiar incandescent bulb that is cheaper but eats up more electricity? (An average incandescent bulb is $0.50 and will cost you $49 per 10,000 hours of use. Compact fluorescents may run you $3, but rack up an electricity cost of only $11 per 10,000 hours of use.)

In a survey, when Weber made incandescent bulbs the default option (in a newly renovated home, for instance), 44 percent of consumers said they would stay with the choice. But when CFLs were presented as the default option, 80 percent went with them instead. Consumers have registered some complaints about CFLs, but it seems that one of the most intense ones is the hassle of making a change.

New York University economist Hunt Allcott has demonstrated that competition can also spur people to make more efficient choices. He studied Opower, a company headquartered in Arlington, Virginia, that sends utility subscribers an energy “report card” comparing their energy usage with that of their neighbors.

Opower now includes these kinds of comparisons in the utility bills of 15 million households across the United States. Allcott’s analysis shows that customers who receive the notices become more conscious of energy use and consume an average of 2 percent less power than those who do not get the comparisons in the mail. There is no government mandate, no utility incentive, just a better kind of communication.

The letters are being used by some utilities to target heavy electricity users who may not be aware that they are wasting energy, and their own money.