A chance discovery reveals the first "makers" predate our genus. 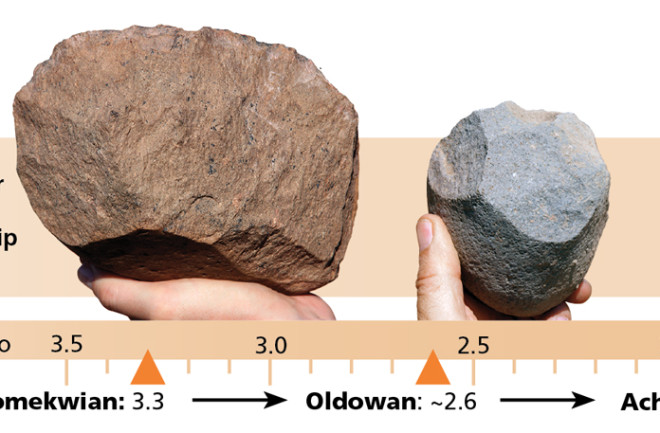 Sign up for our email newsletter for the latest science news
Archaeologist Sonia Harmand and a colleague document the tools in situ at the Lomekwi 3 site in northern Kenya. | MPK-WTAP

Thanks to a wrong turn, a stroke of luck and keen eyes, husband and wife research partners Sonia Harmand and Jason Lewis of Stony Brook University could rewrite our understanding of tool use among hominins. With their team from the West Turkana Archaeological Project, the pair have found evidence that a species predating the genus Homo may have made the first stone tools.

In July 2011, Harmand and Lewis and their colleagues were scouting for sites in the area around northern Kenya’s Lake Turkana. There are no roads in this remote region, so Harmand was forced to drive in dry creek beds while Lewis navigated with a GPS device. It’s all too easy to become disoriented in this kind of terrain; at a certain juncture where the GPS indicated a right turn, she mistakenly went left. They soon found the way blocked by bushes. Unable to drive farther, they climbed a small hill to get their bearings. From the top of the rise, the team gazed down on what Harmand describes as a uniquely beautiful landscape.

“I felt certain it contained hidden areas waiting to be explored,” she says. Everyone fanned out to investigate. “We were only 10 people, working far from each other with walkie-talkies. Around 9 in the morning, we had a call from our local Turkana team member, Sammy Lokorodi. He said, ‘You should come where I am because I think I’ve spotted something very interesting.’ ”

He found stone tools sticking out of an eroding creek bed. The surface above had a dark, weathered patina, but the areas around the rocks were light, suggesting they had been only recently exposed. Harmand knew at once this was an important find because the layers in which the tools were embedded were dated to more than 2.7 million years old.

Paleomagnetic dating — matching magnetic properties in the sediments surrounding a fossil or artifact to ancient reversals in the Earth’s magnetic poles to determine age — later determined the tools had to have been made 3.3 million years ago. Despite the tools’ simple form and huge size, some almost 8 inches across, the angle and patterns on the rocks’ edges showed repetitive strikes that could not have resulted from erosion or other natural processes. Publishing the discovery in Nature in May, Harmand and Lewis dubbed the assemblage the Lomekwi 3, after the area where the tools were found.

Until now, the Oldowan, named by Louis Leakey after Olduvai Gorge in northern Tanzania, was the earliest known stone tool assemblage. Oldowan tools have been found at sites around eastern, southern and central Africa; the oldest, at 2.6 million years, comes from Gona, Ethiopia. Averaging about 2 to 4 inches across, they were made using what paleoanthropologists call a “free hand” technique: A core is held in one hand and repeatedly struck with a round hammerstone held in the other hand to release sharp flakes. Both hands are active and coordinated in their actions.

In contrast, the earlier Lomekwi 3 toolmakers set the cores on larger rocks and struck them with the hammerstone from above. The Lomekwian tools are more than twice as large as Oldowan tools. Although they bear the unmistakable marks of intentional shaping, they are much cruder in form. Harmand believes the Lomekwi 3 tools represent a precursor to free-hand knapping.

While the researchers could definitively state the tools’ age and method of manufacture, a larger mystery looms: Who made them?

In the 1960s Leakey proposed that Homo was the first toolmaker, which remains the accepted view. The very name of the oldest known member of our genus, Homo habilis, translates to “handyman” in reference to tool making. Although the fossil record for the first members of the Homo genus is poor, the earliest definitive H. habilis specimen is about 2.4 million years old. The brain of H. habilis was considerably smaller than that of modern humans, but larger than that of Australopithecus, the family widely viewed as its ancestors.

Australopithecines proliferated in the rift valleys of eastern Africa about 2.6 million to 4 million years ago. The well-known Australopithecus afarensis fossil we call Lucy, for example, lived a little over 3 million years ago in Ethiopia’s Afar region, roughly 700 miles northeast of Lake Turkana. Earlier this year, researchers working at another site in the Afar region found the oldest known Homo fossils: Dated to 2.8 million years old, the fragmentary jaw and teeth, not yet formally assigned to H. habilis, suggest Homo emerged 400,000 years earlier than currently thought. But even with this revised timeline for our own genus, the Lomekwi 3 tools still predate any known species of Homo by more than half a million years.

The list of prime suspects features several species of australopithecine, but Harmand and Lewis also have their eye on Kenyanthropus platyops, a fossil discovered in 1998 very close to the Lomekwi 3 site. Kenyanthropus, at 3.3 million years old, is contemporaneous with the Lomekwi 3 toolmakers — probably not a coincidence. Lewis says the answer is still unclear and that there may be more fossils yet to be found. For now, the most tantalizing clue to the mystery may have come from a separate team of researchers working in a lab far from Lomekwi.

Inheriting a Toolbox of Traits

Enter Matt Skinner and Tracy Kivell of the University of Kent, who discovered an unexpected shared trait in humans and australopithecines. Using a high-resolution CT scan — think of it as a 3-D X-ray — their team documented that human hand bones show increased internal density in response to certain types of stress and repetitive motion, particularly that associated with the manufacture and use of stone tools. They detected these same modifications in a skeleton of A. africanus, another australopithecine that roamed South Africa between 2 million and 3 million years ago.

Research team member Sammy Lokorodi discovered partly exposed stone tools that were made about 3.3 million years ago, the oldest ever found. | MPK-WTAP

Skinner, whose team published their findings in January in Science, believes australopithecines could make stone tools. Moreover, his findings suggest that natural selection favored the grasp, coordination, cognitive skills and hand shape needed to create these early tools. The tools — and the act of making and using them — may have shaped us, too, not just the other way around.

“Researchers have long speculated that there would be tools ‘older than the Oldowan,’ ” says Skinner, “and it is fantastic that this evidence has now been found and published. Of course, it is consistent with our finding, and that is reassuring for us.”

“The good discoveries are the ones that raise more questions,” says Lewis. And the Lomekwi find raises many; it also definitively resets the archaeological record with respect to hominin tool making. Now the big question is: Has our genus been around much longer than previously thought, or did an earlier species of “makers” actually get a head start on the road to Homo?