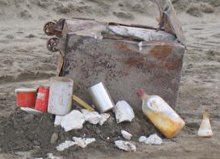 It's one of the biggest cleanup jobs the United States has ever undertaken, and it's a long way from being done. Near the Columbia River in Hanford, Washington, contractors are decontaminating a nuclear fuel processing site that has 177 underground tanks holding 53 million gallons of nuclear waste, some of which has already leaked into the soil and groundwater. And the cleanup crew has learned that the known hazards are just the beginning.

[S]loppy work by the contractors running the site saw all kinds of chemical and radioactive waste indiscriminately buried in pits underground over the 40 years Hanford was operational, earning it the accolade of the dirtiest place on Earth. In 2004, clean-up work uncovered a battered, rusted, and broken old safe containing a glass jug inside which was 400 millilitres of plutonium [New Scientist].

In a new study published in Analytical Chemistry [subscription required], researchers announced that the plutonium inside that jug had quite an impressive and terrible pedigree. Analyzing the sample's isotopes and studying the historical records revealed that it was processed into plutonium-239 in December of 1944, as part of the first batch of weapons-grade plutonium ever made. Just eight months later, Hanford plutonium was used in the nuclear bomb that fell on the Japanese city of Nagasaki. The overall cleanup of the Hanford site is expected to cost about $50 billion, and the remediation effort currently gets about $2 billion per year from the Department of Energy. But that money hasn't been enough to keep the project on track; managers have announced that they will miss 23 deadlines this year due to lack of funds.

That's one reason senators whose districts include Department of Energy sites such as Hanford are pushing for stimulus money to rejuvenate local economies with cleanup work and, they hope, provide freshly scrubbed land for industrial development. "This is exactly the kind of thing a stimulus package should be composed of," said Sen. Mike Crapo, R-Idaho [AP].

The newly appointed Secretary of Energy, Steven Chu, pledged during his confirmation hearings last week to expedite the cleanup effort at Hanford and other nuclear waste sites.

"Cleanup of these materials is a complicated, expensive long-term project, but I pledge to you to do my best to accelerate these efforts in order to protect human health and the environment, and to return contaminated lands to beneficial use," Chu said.... Under questioning from Sen. Maria Cantwell, D-Wash., Chu said there should be a "significant" amount of additional cleanup money in a stimulus bill Congress is expected to consider in the coming weeks [Tri-City Herald].

Related Content: 80beats: Should Yucca Mountain Hold More Than 77,000 Tons of Nuclear Waste, or None? 80beats: EPA Sets Radiation Limit for Nevadans Living 1 Million Years From Now DISCOVER: End of the Plutonium Age dives into the enduring mysteries of plutonium DISCOVER: Bombs Away explains how to dismantle a nuclear warhead Image: Department of Energy, showing the safe and the plutonium-filled bottle found at the Hanford site