Should Yucca Mountain Hold More Than 77,000 Tons of Nuclear Waste, or None? 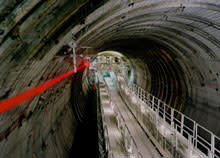 The U.S. Department of Energy is lobbying to expand the controversial plan to store nuclear waste inside Nevada's Yucca Mountain, even as the entire project's fate is thrown into uncertainty with the election of Barack Obama as the nation's next president. The locally unpopular project has been repeatedly delayed due to lawsuits and safety concerns (the federal government originally promised to start accepting waste from nuclear power companies in 1998, but is now scheduled to open in 2020), and Obama has previously signaled that he might scrap the facility all together. Yet recent statements by the Energy Department's Edward Sproat underscored the urgency of finding some safe, final destination for the United States' growing piles of nuclear waste. Sproat told Congress last week that

the 77,000-ton limit Congress put on the capacity of the proposed Yucca waste dump will fall far short of what will be needed and has to be expanded, or another dump built elsewhere in the country.... He said within two years the amount of waste produced by the country's 104 nuclear power plants plus defense waste will exceed 77,000 tons [AP].

Sproat suggested that Congress scrap the limit, or else empower the Department of Energy to search for another site for a secondary facility. However, the incoming Obama Administration is not expected to take a friendly stance towards the current Yucca Mountain repository, let alone to embrace an expanded facility. In a 2007 letter to Nevada Senator Harry Reid, a staunch opponent of the project, Obama agreed that the Yucca Mountain facility was not a workable option.

"In short, the selection of Yucca Mountain has failed, the time for debate on the site is over and it is time to start exploring new alternatives for safe, long-term solutions based on sound science," Obama wrote [Las Vegas Review-Journal],

although he did not suggest what those alternatives might be. One expert says that expanding the Yucca Mountain repository might not be possible while maintaining safety standards. Geologist Allison Macfarlane,

who has studied the Yucca Mountain area, said there are clear limits to Yucca expansion because of nearby earthquake fault lines and potential volcanic activity. "There are geological constraints on Yucca Mountain. It is not an endless sink for nuclear waste," said Macfarlane [AP].

Macfarlane also acknowledged that decisions about where to store radioactive waste are driven as much by politics as by science, and she suggested that adding additional facilities in other states might reduce the opposition in Nevada. Related Content: 80beats: EPA Sets Radiation Limit for Nevadans Living 1 Million Years From Now 80beats: So Much Radioactive Waste, So Little Time DISCOVER: Welcome to Yucca Mountain tells the full story on how the storage facility was deemed an acceptable risk Image: Department of Energy