Floods reached "biblical" proportions after a year's worth of rain fell during a single week in September. 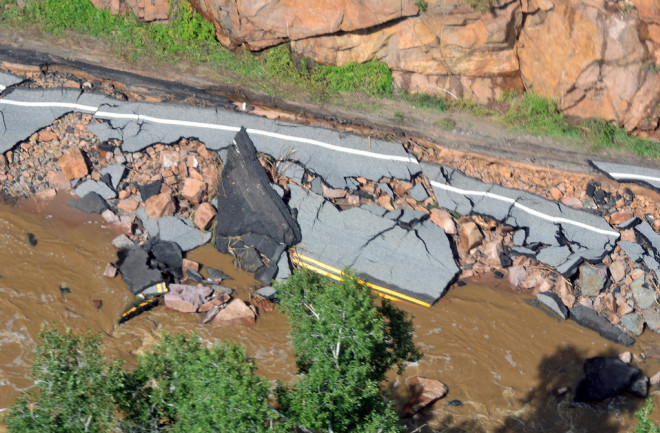 On Sept. 12, Boulder, Colo., saw a record 9.08 inches of rain — the most rain ever recorded there in a single day. And the precipitation continued for days. By Sept. 16, when this photo was taken from a flood rescue and recovery operation, the resulting flood waters had damaged nearly 200 miles of road. | U.S. Army photo by Sgt. Jonathan C. Thibault/Flickr

The rains pouring down on the eastern slope of Colorado’s Rocky Mountains kept coming, day after day, for an entire week in September. Fueled by tropical moisture drawn north and pinned over the area by a stalled weather pattern, the amount of precipitation between Sept. 9 and 15 in some areas was more than what typically falls in an entire year.

The ordinarily staid National Weather Service described it as “biblical.” And weather statistics for this semi-arid region suggest that the odds of such a deluge occurring in this region are about once every thousand years.

The resulting floodwaters killed eight people, destroyed more than 1,800 homes and damaged at least 200 miles of roads across 1,918 square miles. On the high plains, more than 48,000 gallons of oil from damaged wells and storage sites washed across the land, mixing in places with runoff from feedlots and sewage plants.

The flooding wasn’t unprecedented; an epic event in September 1938 had similar consequences. As in 2013, the ’38 flood was preceded by drought.

The contiguous United States has warmed considerably since 1938, and there’s no question that climate change was at play this time, says National Oceanic and Atmospheric Administration scientist Martin Hoerling, who examines links between extreme weather events and climate. Exactly how it did so and to what degree is still a matter of active research.

One thing is already clear: A warmer global atmosphere currently holds about 3 to 5 percent more water vapor than it did at the beginning of the 20th century, and that can contribute to heavier precipitation.

But during the rains, water vapor over Colorado climbed to a record high — as much as 200 percent above average. Given those numbers, this aspect of climate change likely played a relatively small role in the Colorado disaster. As Hoerling puts it, even without global warming, “nature has a way of delivering.”

[This article originally appeared in print as "The Colorado Deluge."]