The birth and evolution of Hurricane Alex, as seen in spectacular satellite imagery 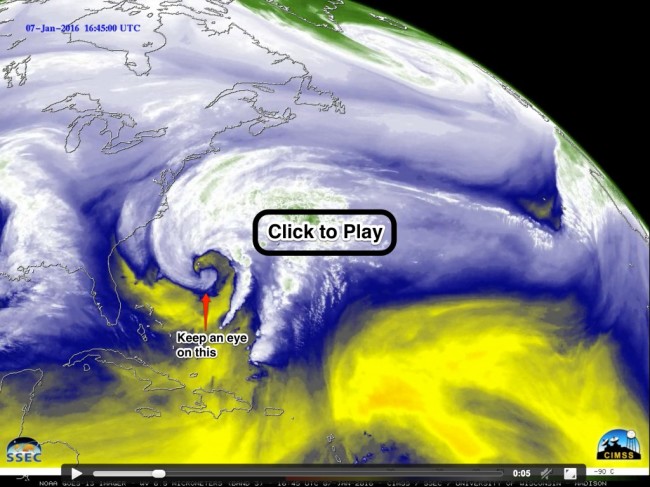 An animation of imagery from the GOES-13 satellite shows the evolution of a cyclonic storm between January 6 and 14, 2015, that culminated in the formation of Hurricane Alex in the North Atlantic Ocean. (Source: Satellite Blog of the Cooperative Institute for Meteorological Satellite Studies, University of Wisconsin, Madison) Since 1851, records show that just two hurricanes have churned through the Atlantic Ocean in January. Until yesterday, that is, when a cyclonic low pressure system born off the U.S. southeast coast early in January evolved into Hurricane Alex. After achieving hurricane strength, Alex subsided to tropical storm strength, coming ashore today as a tropical storm in the Azores, according to the National Hurricane Center:

Satellite and surface data indicate that Alex made landfall on the island of Terceira around 915 AM AST (1315 UTC) as a tropical storm with an intensity of 70 mph (110 km/h).

Alex is now moving northward, packing estimated sustained winds of about 70 miles per hour. (Hurricane strength is 74 mph and above.) As the forecast track shows (click on the thumbnail at right), Alex may restrengthen to hurricane force for a time, and then subside as it curves northwestward toward the southern tip of Greenland. To watch the evolution of Alex between January 6 and 14, click on the screenshot above. That will launch an animation of false-color imagery acquired by the GOES-13 weather satellite showing water vapor in the atmosphere. Blue, white and green colors show where water vapor is highest. (The animation is from the Cooperative Institute for Meteorological Satellite Studies, which runs the ever-awesome CIMSS Satellite Blog.) The storm begins as a disturbance over the Bahamas on January 6. It then rapidly intensifies into a strong mid-latitude cyclone, which moves up the coast and then eastward out into the North Atlantic, where it wanders for awhile. Then on January 13, it forms into Subtropical Storm Alex in the eastern Atlantic. The National Hurricane Center declared Alex a hurricane on Thursday, Jan. 14, 2015. This is quite unusual, according to the Weather Underground's Bob Henson:

In records going back to 1851, only two hurricanes are known to have prowled the Atlantic during the month of January: an unnamed tropical storm that became Hurricane One on January 4, 1938, and Hurricane Alice, which maintained hurricane strength from December 31, 1954, to January 4, 1955. Alice topped out at 80 mph, so Alex is officially the strongest January hurricane on record in the Atlantic.

Meanwhile, in the Pacific, we've had Hurricane Pali, which has now weakened into a tropical depression. According to Henson, Wednesday marked "the first time in the modern era of tropical cyclone observing and prediction that we had simultaneous named systems in January in the Atlantic (Alex) and Central Pacific (Pali) — or, for that matter, anywhere in the Pacific." As I said in a previous post, we should fasten our seat belts. The wild weather ride is only just beginning.