Evil-looking mile-wide cracks slicing across the seafloor off the coast of Virginia and North Carolina testify to past violence in the region. Neal Driscoll, a geologist at Woods Hole Oceanographic Institution in Massachusetts, recently startled many coastal residents when he announced a possible cause for the fissures. On a research cruise, he and his colleagues bounced sound waves off the ocean bottom near Chesapeake Bay and spotted reservoirs of buried, compressed natural gas. A disturbance might cause these gas reserves to blow, creating the cracks. If the event were big and fast enough, Driscoll says, it might trigger a submarine landslide and set off a tsunami.

Now a group at Pennsylvania State University has detected evidence of a similar upheaval along the Jersey shore. Graduate student Brandon Dugan and geologist Peter Flemings found a layer of high-pressure fluid trapped beneath the ocean bottom 100 miles off the coast of southern New Jersey. The 350-square-mile layer was formed 500,000 to 250,000 years ago when sediment from the Hudson River piled up and compressed the underlying siltlike sand. The fluid is trapped, but an earthquake could increase the pressure and send it surging out. Fortunately, these events seem to be rare. "The risk of a slope failure triggering a tsunami along the East Coast is small, but it is real," Driscoll says. 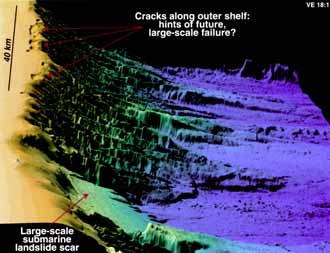