Testing For Arsenic in Drinking Water Without Sampling Wells? 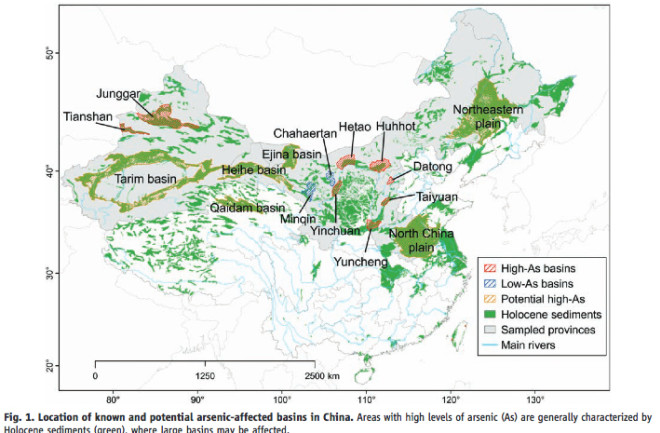 That would be wonderful, as an estimated 140 million people worldwide consume groundwater containing unsafe levels of arsenic. There just simply aren’t enough resources to test the hundreds of thousands of wells, many in developing countries and rural areas, which could be harboring this toxic substance.

Arsenic is a naturally occurring element. Long-term chronic exposure to it — primarily through drinking water — has been linked to skin discoloration, loss of feeling in hands and feet, and cancer. The U.S. Environmental Protection Agency has set the standard for arsenic in drinking water in this country at 10 parts per billion (less than a drop in an Olympic-size swimming pool), but in many regions around the world people are exposed to much higher levels.

(Read more about arsenic in water and food in the next issue of Discover magazine, in which Deborah Blum investigates the health effects of consuming trace amounts. In an August blog post for the Crux she discusses the first study to confirm a link between consuming arsenic-contaminated rice and suffering cellular damage.) Detecting arsenic-laden waters has been the work of many NGOs and global health organizations. For their part, researchers at Eawag, the Swiss Federal Institute of Aquatic Science and Technology, and the School of Public Health at China Medical University have been working on models that can predict where alarming levels of arsenic lurk in groundwater.

And they finally have one that they feel is reliable enough to use, at least in China. Their findings are published in the August 23 issue of Science.

Arsenic poisoning was first identified as a problem in China in the late 1970s, in the arid north. But testing each of the nearly 10 million wells there was an impossible task. Only a small fraction had been monitored. The model used geospatial data on geology, soil properties and hydrology along  with previously collected data on where arsenic had been found to make accurate assessments of where high levels of arsenic plague groundwater throughout the north. China presents a unique opportunity because there is enough fine-scale data to use, explains study author Annette Johnson, a senior scientist and research group leader in the Department of Water Resources and Drinking water at the Swiss Federal Institute of Aquatic Science and Technology. China also has several key traits that make it vulnerable to arsenic contamination: Young sediments from the Holocene associated with certain sedimentation processes (rivuarine or lacustrine) can be associated with chemical conditions that release arsenic into groundwater.

Comparing the model’s assessments to existing water quality data, researchers determined that the model was able to identify high-risk areas more than 77 percent of the time. Based on those numbers, the researchers have mapped out arsenic hotspots (see the above photo) and suspect an estimated 19,580,000 people in China live in contaminated areas.

While a 77 percent success rate is good, it is not enough. “You can never rely on just on modeling,” says Johnson.  “Even in contaminated regions, you have a high variability, related to the way sediments are formed. The map should be a support to target hotspot areas that should be sampled first. But that doesn’t mean the CDC shouldn’t do any monitoring in areas that are deemed safe.”

The Chinese members of the team will work with the country’s ministry of health to identify arsenic hotspots that deserve more attention and testing.

“It is an enormous task,” adds Johnson. But such modeling success could be the next step toward quicker, more cost-effective arsenic detection methods.