So you no longer want to be a scourge of everything we hold dear / friend to Saudi Arabia. You want to throw away your SUV. But how is it done? A San Franciscan named Ryan Mickle raised the question for real on a web site this month, and little by little became a web phenom. 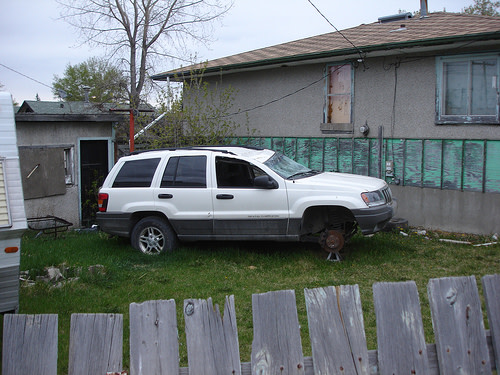 People wrote in with insults, bad suggestions (fill it with concrete, throw it in the ocean and maybe it will become a reef), and some less insane ones (find a way to donate it to people in a poor remote village somewhere who will use it efficiently, as a transport vehicle). Even if you hate PR stunts, this one poses a legit question: what are we going to do with our many, various, increasingly hated, polluting machines, given that throwing them away or burning them is so counterproductive?My suggestion (probably already voiced by somebody): take off the wheels, gut them, and turn them into stationary dwellings for homeless people, in sprawling cities where there is space for fields of dead SUVs. Which would admittedly create conglomerations resembling vast, drugs-afflicted trailer parks without toilets, yes. Let's see you do better. Image: flickr/Kevin