Glass that "breathes" like gills, solar cells that imitate leaves, and other biomimetic technologies 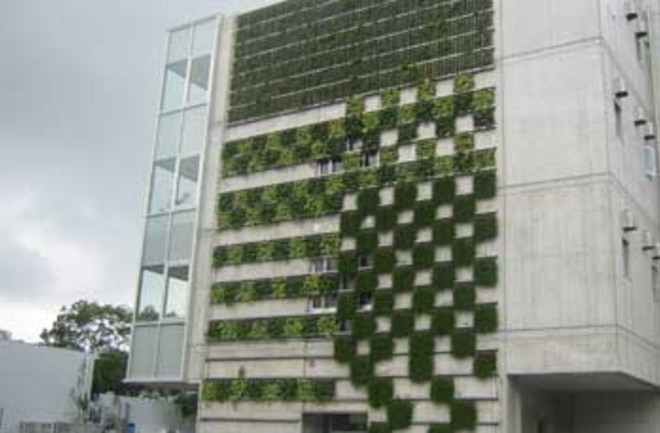 Want to cool a building? Steal a trick from the forest canopy and use leaves for shade, as Osaka University did with its Frontier Research Center (pictured above). Builders, architects, and designers seeking better ways to go green are increasingly turning to nature—the original green—for solutions that have proven track records in the real world.

Engineering inspired by nature can be “functionally indistinguishable from the elegant designs we see in the natural world,” says Janine Benyus, a leading proponent of nature-based design and founder of the Biomimicry Institute. Benyus says the strategy has already yielded a wide range of new products that may replicate nature’s successes: ceramics with the strength and toughness of abalone shells, self-assembling computer chips that form by processes similar to the way that tooth enamel grows, adhesives that mimic the glue that mussels use to anchor themselves in place, and self-cleaning plastics based on the structure of a lotus leaf.

Some biomimicry efforts are tackling large-scale challenges such as supplying energy to an entire building. The Kyoto-based company Kyosemi has developed a power-harvesting solar cell that imitates the way that trees collect sunlight from various angles with their leaves. Called Sphelar, the product comprises little spherical cells that can be incorporated into a building’s windows. Unlike standard photovoltaic panels, Sphelar can absorb light from many directions, providing more consistent power generation as the sun moves across the sky.

Other projects aim to keep sites safer and cleaner. Kinetic Glass can alert workers or residents to dangerous conditions. Under development by the creative think tank The Living, this new product takes a cue from animal respiratory systems. The glass is made with a slit silicone surface that allows air to pass through, and it has tiny sensors that can detect the levels of certain gases. In the presence of, say, excess carbon dioxide, the material opens and closes its “gills” to exchange the air. The gills’ movement also acts as a visual warning to building occupants.

“As all kinds of sensors become smaller, cheaper, and more networked, there is a great opportunity for architecture to come to life and respond to information about environmental conditions that are normally invisible,” says David Benjamin, an architect with the design team at The Living.

Inspired by the air- and soil-purifying abilities of plants and fungi, other scientists are developing materials that can help eliminate harmful substances in their immediate vicinity. Concrete that absorbs carbon dioxide, highway barriers that break down smog, and paint that eliminates odors in the room where it is used are just a few of the products that these researchers are working on.

The SuperAbsorber highway barrier, for instance, reduces local airborne pollution through a process known as photocatalyzation. Architects Douglas Hecker and Martha Skinner of the design studio Fieldoffice dreamed up Super­Absorber as they discussed how “barriers should be designed to absorb airborne pollution and light pollution, in addition to sound pollution,” Hecker says. According to Italcementi, an Italian maker of photo­catalytic cement, the airborne pollution of a large city could be cut in half if pollution-reducing cement were to cover just 15 percent of urban surfaces.

BIOMIMICRY The emulation of natural designs and processes; imitation of life

SELF-CLEANING PLASTIC Plastic with a surface that causes liquids to roll off, achieved by forming it in a mold with tiny bumps like those on the surface of a lotus leaf

PHOTO-CATALYZATION A process that uses light to speed up chemical reactions, such as the breakdown of pollutants