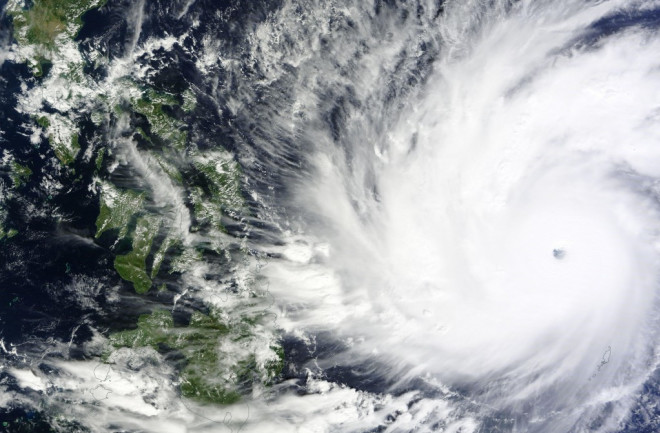 Source: JTWC The U.S. Joint Typhoon Warning Center and the Philippine PAGASA agency disagree on Hagupit's exact track, but the storm is likely to hit the area devastated by Super Typhoon Hayan. Click on the thumbnail at right for the JTWC's latest forecast track. And click here for PAGASA's forecast. The good news is that Hagupit is likely to weaken quite a bit before landfall, thanks to wind shear and cooler ocean temperatures closer to the coast. The bad news is that high winds, storm surges, and landslides from torrential rains are all quite possible. The typhoon intensified rapidly yesterday. Today it features a well defined eye, as seen in the image at the top of this, acquired by NASA's Terra satellite today. The Philippine islands are to the left side of the image. Ocean conditions this year are very different from last. As reported by Jeff Masters, chief meteorologist for Weather Underground, "Haiyan intensified into a Category 5 super typhoon with 195 mph sustained winds . . . on November 7, 2013" — fueled by unusually warm sub-surface waters. This year, there is less heat energy in the Western Pacific to fuel typhoons, thanks to a slowly developing El Niño. Trade winds, which blow from east to west, have weakened. This has allowed warm waters in the Western Pacific to slosh eastward, toward South America. Today, the U.S. Climate Prediction Center upped the odds of a full-fledged El Niño developing this winter. Last month they pegged the odds at less than 60 percent. Today's assessment puts it at 65 percent. But as in previous reports, the CPC says it is likely to be a weak event.