The powerful greenhouse gas is coming in surprisingly large quantities from a few hundred landfills, dairy farms and oil and gas production facilities. 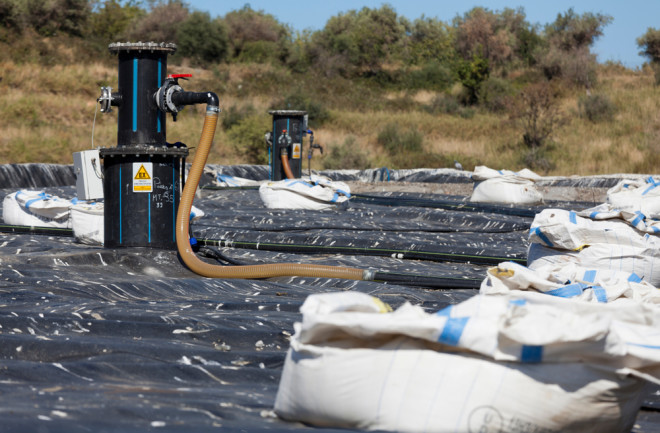 A landfill in Italy with a methane capture system. (Credit: newphotoservice/Shutterstock)

A new analysis finds that 0.2 percent of all California methane emitters — individual pipes emitting or leaking the greenhouse gas — account for more than a third of the state’s methane production.

Nearly half of these methane sources, dubbed super-emitters, come from landfills. Dairies and the oil and gas industry account for a quarter of discharge sites each. Ideally, pinpointing these emitters will help shut down ones that are accidental methane emissions, like leaky pipes, says study coauthor Riley Duren, an engineer with the University of Arizona and NASA’s Jet Propulsion Laboratory. “A small number of super-emitters contribute disproportionately, and that suggests some low-hanging fruit.”

Though large swathes of land also produce methane — think melting permafrost and herds of cattle burping up the gas — the powerful global warming agent also puffs out in localized spots called point sources. California is tracking where all the state’s greenhouse gas emissions are coming from — but, so far, there hadn’t been a survey looking across industries to document the state’s point-source methane production, Duren says.

Duren and his team flew an imaging device that picks up on methane gas over about 60 percent of California’s point sources, or 300,000 locations. The team scanned the landscape three years in a row. Because some of the emitters only occasionally release methane, it was important to go over them several times to know how often they were active, Duren says. Their data, published with the report in Nature, is available to the public.

A gas leak identified by the team during their research. The image was taken after the leak was repaired, showing that no methane was being released. (Credit: NASA/JPL-Caltech)

The team found 46 percent of the emitters were from landfills, which produce the gas as trash decomposes. After pinpointing each super-emitter, Duren’s research group notified the facilities. While some of the leaks came as a surprise to the landfills, it’s likely the methane release is a consequence of other management choices, like how the dump deals with odor. For things like natural gas leaks in urban areas, employees were thankful to have the research team’s input, Duren says.

Not every state has California’s industrial diversity, from agriculture to oil and natural gas production. But a similar survey in the Four Corners region of the American Southwest revealed a similar super-emitter profile across industries. Duren says more of these tests are needed elsewhere in the U.S. to see the entire emission landscape.

The results also reinforce the need for more frequent methane-detection flyovers like the ones Duren and his team did. Right now, there are only four or five devices in the world that can do this kind of assessment, Duren says. They’re expensive and overbooked with other research agendas. But as their results point out, “measurement approaches that only go out once every three months or once a year are inadequate,” he says. More and lower-cost versions are needed for cities and states to do their own regular scans to find and eliminate other major methane emitters.