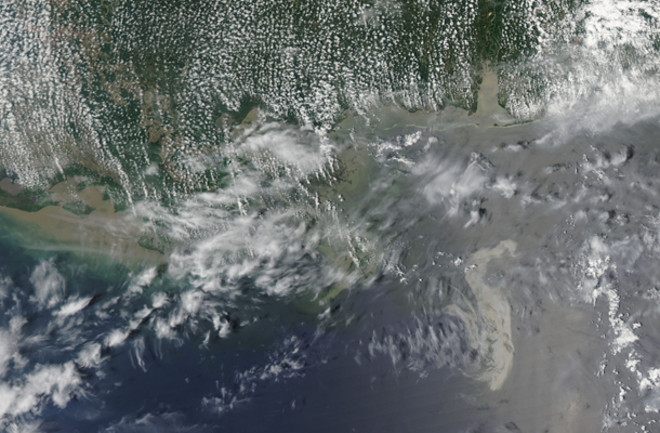 An image from the MODIS on NASA’s Aqua satellite on Tuesday afternoon, May 11, shows that the damaged Deepwater Horizon oil well continued to leak significant amounts of oil in the Gulf of Mexico. Oil slicks become most visible in satellite images when they appear in a swath of the image called the sunlit region—where the mirror-like reflection of the sun is blurred by ocean waves into an area of brightness. In the bright zone of reflection, the difference between the oil-smoothed water and rougher surface of the clean water is enhanced. The slick appears as a silvery-gray patch in the center of the image. The tip of the Mississippi Delta is at upper left. Wispy clouds make it hard to determine whether any of the streamers or smaller patches of oil extend northeast of the main slick. Image courtesy Jeff Schmaltz, MODIS Land Rapid Response Team, NASA, GSFC