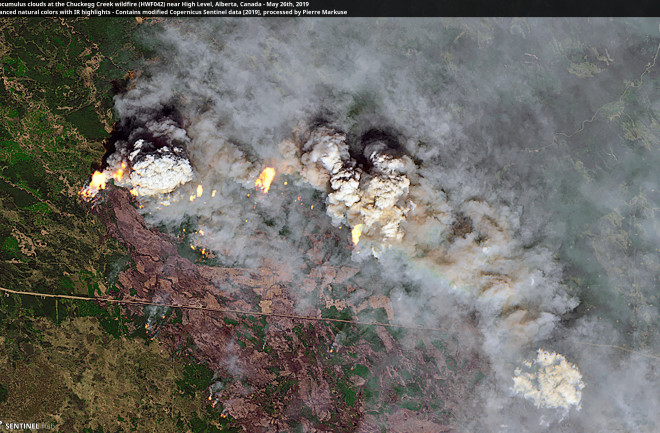 A satellite view of the Chuckegg Creek wildfire near High Level, Alberta in Canada on May 26, 2019.

With unusual heat refusing to loosen its grip on Western Canada, ten out-of-control wildfires are now burning in northern Alberta.

Thanks to the hot, dry weather and rising winds, officials in Alberta were concerned on Tuesday (May 29) that the Chuckegg Creek fire near High Level, Alberta could lead to “blow-up fire behavior.” The fire has already scorched 580 square miles — an area larger than the City of Los Angeles.

The Chuckegg Creek fire is seen in the satellite image above, captured by the Sentinel-2A satellite on May, 26, 2019. The image was processed by blogger and remote sensing expert Pierre Markuse.

The image combines natural color with data acquired in the infrared portion of the electromagnetic spectrum. The infrared reveals heat from the flames, which might otherwise be difficult to see through the smoke.

The image also reveals exploding columns of smoke. These have formed as rising air currents have carried water vapor high into the atmosphere, causing it to cool and condense. The result: giant fire clouds, known as pyrocumulus clouds, that resemble thunderheads.

Since this satellite image was captured three days ago, the Chuckegg Creek fire has expanded dramatically, and others have erupted as well.

The animation above, consisting of images acquired on May 29 by NOAA’s GOES-16 weather satellite, shows multiple wildfires and expansive smoke plumes. Look closely and you can see pyrocumulus clouds boiling up above the broader plumes of smoke.

As with the image of the Chuckegg Creek Fire, this animation also combines data from the visual and infrared parts of the electromagnetic spectrum. In this particular remote sensing format (known as “Day Land Cloud/Fire RGB“), smoke has a dark cyan color, and fire hotspots are indicated in red.

The image above, acquired by NASA’s Terra satellite on May 29, shows the smoke plumes from Alberta’s wildfires in a much broader context. (Make sure to click on the image to view it larger.) They’ve obviously travelled very far. But what you can see in the image doesn’t actually reveal the full geographic extent of the smoke.

The map above, based on data from multiple satellite sensors on May 29, 2019, shows that smoke from the fires has actually spanned the entire North American continent from east to west.