Two views from the GOES-16 weather satellite show powerful storms boiling up over Texas and New Mexico. An infrared view is on the left, and visible imagery is on the right. The path of American Airlines Flight 1897 — which was struck by hail and forced to make an emergency landing — is included. Please click to watch the animation. (Source: Cooperative Institute for Meteorological Satellite Studies.) After I watched the animation of satellite imagery above a few times, the words "bob and weave" came to me as a way to describe the evasive maneuvers American Airlines Flight 1897 seemed to be taking to avoid the worst parts of vicious thunderstorms that were boiling up everywhere along its flight path. Unfortunately, the twin-engine Airbus 319 couldn't avoid the devastating punches from one particularly nasty and towering thunderstorm cell, which pummeled the aircraft with hail stones that may have been as large as 2.5 inches in diameter. We're talking almost baseball size — and those big chunks of ice smashed into the aircraft as it was jetting along at about 575 miles per hour. The results were devastating. The hail destroyed the nosecone of Flight 1897, and it smashed the windshield so badly that the pilots could not really see out. https://twitter.com/capitalweather/status/1004084446763606017 The aircraft diverted to El Paso, where it made an emergency landing. No injuries were reported. This is a testament to the skill of the pilots and close coordination with air traffic control. But as Jason Samenow reports at the Washington Post, questions linger about how the pilots could have allowed themselves to fly into such nasty weather to begin with. The animations above are based on data from the GOES-16 weather satellite. The left panel shows the development of the complex of severe storms in the infrared portion of the electromagnetic spectrum. The pink colors show where cloud tops were coldest — as frigid as about -80 degrees C. This indicates that extremely strong convection had caused clouds to rise far into the atmosphere, punching into the stratosphere. The right panel shows the development of the storms in the visible portion of the spectrum. And in both, the track of Flight 1897 is marked by the little white airplane symbol. (Make sure to click on the animation to watch it in its entirety.) The aircraft lifted off from San Antonio at 6:58 p.m. CDT, and it enters the field of view of the animations as two areas of strong storminess converge over southeastern New Mexico, one from the west and the other from the east. After crossing from Texas into New Mexico, Flight 1897 begins to turn north, and it seems obvious to me that the pilots are trying to find their way through the worst areas. Starting at about 9:10 p.m., the plane went into a steep descent, plunging more than 3,000 feet in a minute. (Check it out for yourself in this flight track log posted to Flight Aware.) This is presumably the time that the aircraft was battered by hail. Flight 1897 then turns abruptly south, and eventually makes the emergency landing in El Paso. 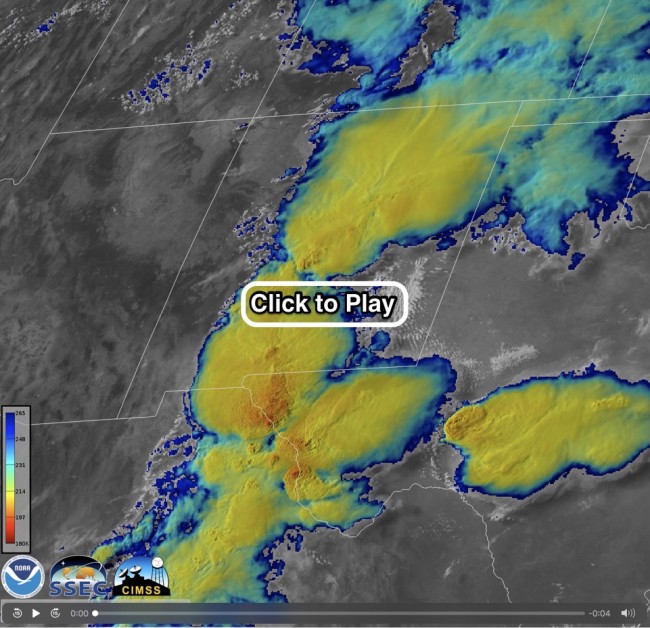 Imagery from the GOES-16 weather satellite combining data from the visible and infrared portions of the electromagnetic spectrum shows the storms over Texas and New Mexico in stunning detail. (Source: Cooperative Institute for Meteorological Satellite Studies.) The animation above shows the thunderstorm complexes converging. It's known as a "sandwich" product because it is a kind of sandwich made up of visible and infrared imagery. The visible imagery shows stunningly fine details in the clouds as they boil up. And the infrared imagery shows the temperatures of the clouds. In this case, the redder, the colder. As nighttime falls, the animation transitions to infrared imaging only.