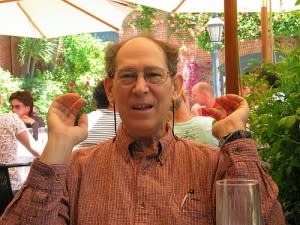 I am stunned, because he seemed so alive and vibrant when I saw him in December 09 in Copenhagen, and in Feb 2010 at the AAAS meeting in San Diego. But Stephen Schneider, one of the greats of climate science--and climate policy, and public outreach--died today of an apparent heart attack. There are tributes from the WWF blog, DotEarth, HuffPost, and many more. Let me quote Andy Revkin:

, which Schneider — always following the data — ended up determining would more likely be a “nuclear autumn.” It was his caustic honesty about the complex nature of global warming, and the inherent uncertainties in the science, that kept mereturning to him for input from 1988 onward. He was a participant in the assessments of the Intergovernmental Panel on Climate Change from the beginning until the last days of his life. He encouraged scientists to get out and communicate directly with the public, maintaining a Web page, “Mediarology,” describing the challenges attending such a move.

Ralph Cicerone, president of the National Academy of Sciences, says:

His biggest goal in life was to see a rational approach to policy about climate change, where he tried to evaluate the odds and show people, just like in many other decisions in life, with climate they had to play the odds. He was trying to produce probabilistic ways to make evaluations that could work. In his lifetime, his approach on this became progressively more sophisticated.

His clear and comprehensive explanations of climate change, his encyclopedic knowledge of how the climate works, and his challenges to the fraudulent science that characterizes the arguments of the climate deniers, made it easier for politicians to understand the true climate threats that face us and to move the debate into the public arena. That debate continues, because the science and policy challenges are complicated, but the world is at least beginning to take key steps toward preventing a climate catastrophe because Stephen Schneider knew that the alternative was unacceptable and because he worked tirelessly to move us all in the right direction.