Some Volcanoes Create Undersea Bubbles Up to a Quarter Mile Wide 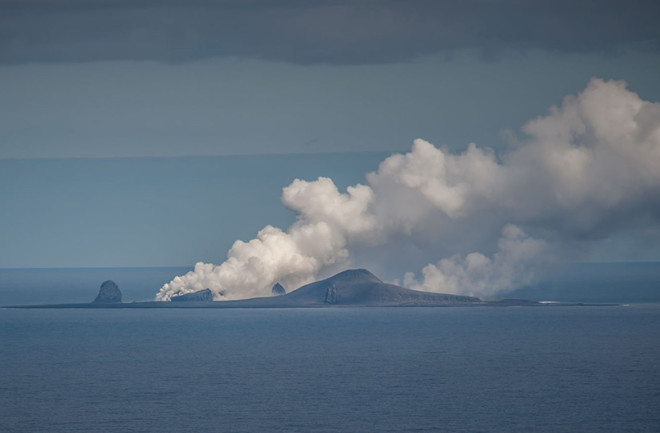 (Inside Science) — As a geophysicist at the Alaska Volcano Observatory, John Lyons spends much of his days trying to decipher the music of volcanic eruptions. Sensitive microphones scattered across the Aleutian Arc — a chain of over 80 volcanoes that sweeps westward from the Alaskan peninsula — eavesdrop on every explosion, tremor and burp.

In 2017, the partially submerged volcano Bogoslof erupted, sending clouds of ash and water vapor as high as 7 miles above sea level and significantly disrupting air traffic in the area. Throughout the nine months that the volcano remained active, the observatory’s microphones picked up a strange, low-and-slow melody that repeated over 250 times.

“Instead of happening very fast and with high frequencies, which is typical for explosive eruptions, these signals were really low frequency, and some of them had periods up to 10 seconds,” said Lyons.

The source of the odd sounds remained a mystery for months, until one of Lyons’ colleagues stumbled upon a striking description of the ocean’s surface during a 1908 Bogoslof eruption, observed from a Navy ship. As reported in a 1911 issue of The Technical World Magazine, officers reported seeing a “gigantic dome-like swelling, as large as the dome of the capitol at Washington [D.C.].” The dome shrank and grew until finally culminating in “great clouds of smoke and steam … gradually growing in immensity until the spellbound spectators began to fear they would be engulfed in a terrific cataclysm.”

Lyons and his colleagues wondered if the low-frequency signals they heard could correspond to huge bubbles of gas forming just under the surface of the ocean. They modeled the sounds as overpressurized gas bubbles near the water-air interface, inspired by studies of magmatic bubbles that formed at the air-magma interface of Italy’s Stromboli volcano, which emitted similar signals but of shorter duration.

Their results, published in the journal Nature Geoscience on Monday, suggest that submerged volcanic explosions can indeed produce Capitol dome-sized bubbles — and according to their calculations, these would be considered on the smaller side. The bubble diameters from the 2017 Bogoslof eruption were estimated to range from 100 to 440 meters (328 to 1,444 feet), with the largest stretching more than a quarter-mile across.

The researchers propose that gargantuan bubbles would arise from the unique interaction between cold seawater and hot volcanic matter. As magma begins to ascend from the submarine vent, the seawater rapidly chills the outer layer, producing a gas-tight cap over the vent. This rind of semicooled lava eventually pops like a champagne cork as a result of the pressure in the vent, releasing the gases trapped underneath as a large bubble. The bubble in the water grows larger and eventually pokes out into the air. After a few rounds of expansion and contraction, the bubble breaks, releasing the gas and producing eruption clouds in the atmosphere.

The low-frequency sounds come from the bubble alternately growing and shrinking as it attempts to find an equilibrium between the expansion of the gas inside and the constriction of the shell, made up of mostly seawater and volcanic ash. The findings represent the first time such activity has been recorded with infrasound monitoring, which detects sound waves traveling in the air below the threshold of human hearing. Researchers are increasingly turning to the technique as a way to supplement traditional seismic data and gain more insight into eruption dynamics.

“I find the work groundbreaking and impactful,” said Jeffrey B. Johnson, a geophysicist at Boise State University in Idaho who was not involved in the study. “Giant bubbles which defy the imagination are able to oscillate and produce sound that you can record several kilometers away.”

Aside from the 1908 Bogoslof eruption, two other recorded observations match this phenomenon of giant bubbles emerging from the sea: the 1952-53 eruption of the Myojin volcano in Japan and the 1996 eruption of the Karymsky volcano in Russia. A report on the latter event describes “a rapidly rising, dark grey, smooth-surfaced bulbous mass of expanding gas and pyroclasts, probably maintained by surface tension within a shell of water.” The bubble grew to an estimated height of 450 meters above the sea surface.

To witness these bubbles in real life is a challenge, since submerged volcanoes are often remote and surrounded by lots of ocean — not to mention, one’s timing has to be perfect. But Lyons hopes to follow up on this work by studying the dynamics of similar systems that are more approachable and directly observable, such as geysers or mud pots. He envisions listening in on the sounds coming from these types of bubbles to check the validity of certain assumptions they had to make in their model, such as the viscosity of the water.