Smoke from Wildfires Blankets Parts of the West 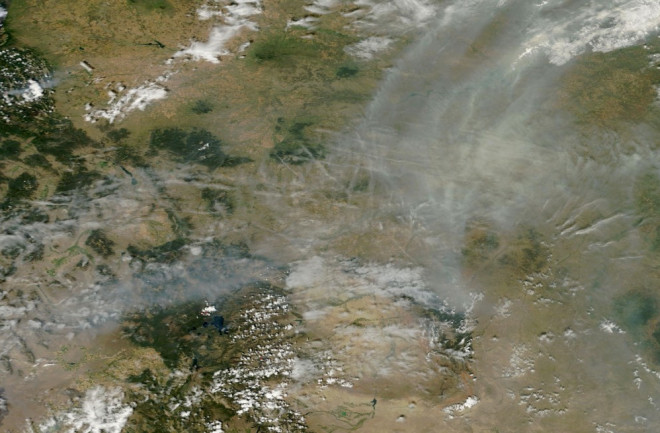 Thick smoke from wildfires burning to the west blankets parts of Montana, as seen in this image captured by NASA's Terra satellite. (Source: NASA Worldview) Nationally, 39 large fires are burning in nine states from Alaska to Arizona. Collectively, they've burned more than three quarters of a million acres. Although it sounds dire — and it has been for individual communities that have been affected — the wildfire activity is about average for this time of year, according to the National Interagency Fire Center. Even so, that's a lot of fire. And smoke. I've noticed the latter here on the eastern slope of the Rockies near Boulder — a thin scrim of haze that has turned the sunlight much more golden than we're used to in Colorado. And given the image from NASA's Terra satellite at the top of this post, people in of Montana, particularly the northeast portion of the state, were really noticing the smoke yesterday. That almost greenish looking stuff criss-crossed in places by straight lines is smoke. To make sure, I checked the aerosol optical depth readings from the MODIS instrument on Terra, which give an indication of the presence of smoke particles in the air. There were a lot. (You can see what I found here.) But what about those criss-crossing lines? I am guessing that they are aircraft contrails.

The Alum Fire burning in Yellowstone National Park. (Source: Inciweb) The Alum Fire in Yellowstone National Park is among the blazes burning to the west of that smoke-shrouded region. It was sparked by lightning last Wednesday, and had grown only to a few acres — until critical fire weather conditions developed yesterday afternoon, fanning the fire to 3,000 acres in just a few hours. From Inciweb's latest update:

Extreme fire behavior was observed including short periods where the fire advanced through the crowns of the mature lodgepole pine forest. The fire advanced at least six miles to the east-northeast in the span of a few hours.

Other fires are burning in Yellowstone as well. And further to the west, nine wildfires burning in Idaho have scorched 407,883 acres, according to the National Interagency Fire Center's latest tally. One of those fires is the Beaver Creek Fire, which has forced the evacuation of thousands of residents in the resort area of Sun Valley. Ignited by lightning on Aug. 7, it burgeoned from 64,236 acres on Friday to 92,754 acres yesterday. Shawna Hartman, a spokeswoman for the team coordinating the efforts to battle the blaze, told the Los Angeles Times that it was shaped like "giant Pac-Man with its mouth open . . . Sun Valley is right in the middle of its open mouth." The fire's growth potential is rated as extreme by Inciweb right now.