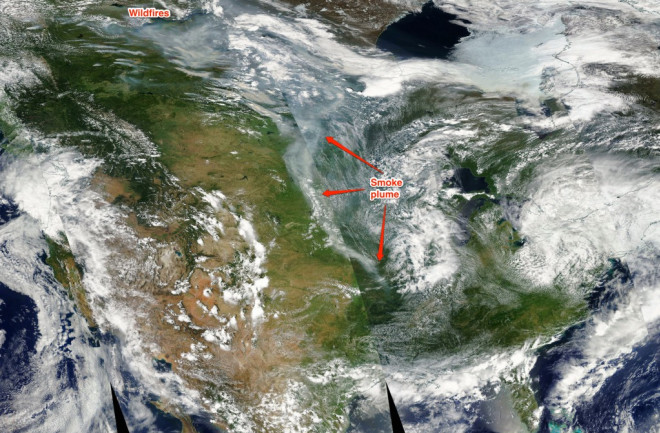 Smoke from hundreds of fires burning in Canada streamed far south into the U.S. on June 28, 2015, as seen in this image from NASA's Aqua satellite. (Source: NASA Worldview) |See update below | Pushed by a wildly contorted jet stream, smoke from more than 200 wildfires burning in Canada's Alberta and Saskatchewan provinces has streamed 1,600 miles south, deep into the United States. You can see the fires and the plume in the image above, acquired by NASA's Aqua satellite yesterday. I did my best to analyze the satellite image and locate the approximate end of the plume. By my estimate, it traveled as far south as southern Missouri, near the city of Springfield. From the fires in northern Alberta, that's a distance of about 1,600 miles. Here's another view, captured yesterday by a GOES weather satellite:

The jet stream's deep kink today. (Image: Climatereanalyzer.org. Annotation: Tom Yulsman) In addition to sweeping smoke south, the jet stream's contorted positioning has caused a ridge of high pressure to build over western North America. This has allowed warm air to penetrate far to the north and raise temperatures as much as 20 degrees F above normal. Meanwhile, a trough of low pressure has allowed cool air to spill south across the Midwest. (Also note the ridge of high pressure that's bringing heat to parts of Europe.) A study published earlier this month found new evidence that rapid warming of the Arctic due to human activities is causing the Northern Hemisphere jet stream to be wavier in a way that promotes extreme weather like the unusual heat now gripping much of western North America. (Not to mention the extreme cold that afflicted the U.S. Midwest and East Cost this past winter.) The research also finds that these contortions are occurring more frequently. The authors conclude with this caution:

As emissions of greenhouse gases continue unabated . . . the continued amplification of Arctic warming should favour an increased occurrence of extreme events caused by prolonged weather conditions.

One important caveat: This is an ongoing area of research, and other scientists are not convinced that warming of the Arctic can be tied conclusively to wavier jet stream patterns. Perhaps additional research will provide a more definitive answer. Meanwhile, there is no doubt about the impact of the unusual warmth and dry conditions that the jet stream's current kinkiness has promoted: They've helped stoke the hundreds of wildfires burning in the forests of Alberta and Saskatchewan. So far this year, in fact, more than 1,600 fires have scorched about 1,500 square miles of territory in the two provinces — an area three times larger than the sprawling city of Los Angeles. (For statistics on wildfires in Alberta, go here; for Canada overall, including Saskatchewan, here.)

Thick smoke plumes stream from wildfires burning near oil sands mines mines in northern Alberta, as seen in this image acquired by NASA's Aqua satellite on Jun 28, 2015. (Source: NASA Worldview) Numerous wildfires are currently blazing in Canada's tar sands region in northern Alberta. In the image above, captured by NASA's Aqua satellite yesterday, I've circled some of the open pit mines from which tar sands are extracted. Numerous thick smoke plumes are visible. Canada's tar sands operations are the largest source of U.S. oil imports. They have also sparked great controversy, thanks to environmental impacts. Just to the south of the open pit mines visible in the satellite image above, the town of McMurray is reported to be blanketed in smoke today, and air quality is qualified as posing a very high risk.